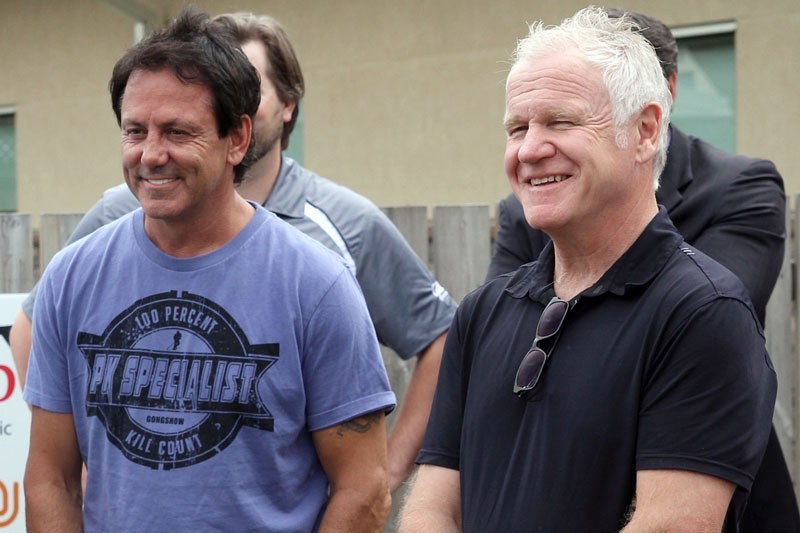 Doug Gilmour says it was a family decision to send his 16-year-old son Jake packing.

Gilmour, the general manager of the Ontario Hockey League’s Kingston Frontenacs, on Thursday said there simply wasn’t enough room for his son to get the playing time he needed to develop.

The 50-year-old NHL hall-of-famer, in Thunder Bay to take part in Patrick Sharp’s celebrity golf tournament in support of the George Jeffrey Children’s Centre, said by no means was he giving up on his offspring as a hockey player.

“This is between my son and I and this is what we thought,” Gilmour said. “It’s a great opportunity for him. Our team is kind of fully loaded, there are not a lot of spots. He’s turning 17 on Aug. 14. He’s 6-fot-4, 205 (pounds) and teams inquired about him.

“And so I sat with him and said, ‘This is probably a better opportunity for you to develop somewhere else and the people in Kingston aren’t going to say, well, you’re only here because of your dad.'”

An eighth-round pick in 2012 by the Frontenacs, Jake Gilmour spent the 2012-13 season with the Brampton Bombers of the Greater Ontario Junior Hockey League, where he collected eight assists in 43 games.

“I gave him away,” Gilmour said, nonchalantly, adding Jake's mother also had a say in the decision.

“If he doesn’t make that team,” I’ll trade back for him next year.”

Gilmour, elected to the Hockey Hall of Fame in 2011, spent 20 seasons in the NHL as a player, best known for his time in Calgary and Toronto. The Kingston-born forward scored 450 goals and 964 assists in 1,474 career games, which included stops in St. Louis, New Jersey, Chicago, Buffalo and Montreal.

He won a Stanley Cup with Calgary in 1989 and took the Leafs to the conference final in 1993 and 1994. Five years after retiring in 2003, Gilmour joined the Toronto Marlies of the American Hockey League in 2008, then took over the coaching reins of the Frontenacs midway through the 2008-09 season.

There's a lot to love about being in the junior game, he said, but like having to trade your son, not everything about his current job is rosy.

"I don't like cutting players, I don't like trading players. That's part of the job, obviously. That's something that's been kind of hard to do. Again, when it all came out yesterday, reading the paper today and people calling me today, my focus was here, not on anything else. My biggest thing is I'll deal with everybody tomorrow. This is something that was between Jake and I and his mother, and this is what he wanted as well," Gilmour said.

As a GM, Gilmour's primary job is to build a winning team. Asked why the Northern Ontario pipeline has dried up a bit after the recent heyday that brought the likes of the Staals, Pyatt's and Sharp to the NHL, he was candid.

It's not easy to scout players who practice their craft in such a remote location.

Gilmour said he's got scouts on the lookout for talent, but it helps when they are tipped off too.

"We'll see some of these teams in tournaments, but like everything else, if we hear about it (we'll react). Most of the time we hear about (a player) through Central Scouting. If teams, coaches or whatever write to us or email us, then we get it. But it's not easy to get up here and see guys when you've got to follow your own team to start with," said Gilmour, adding he usually gets to make the first four picks in a given draft, but then relies on the scouts for the rest.

For now Gilmour said he remains focued on building a winner in Kingston and is not interested in returning to the professional ranks, but it's also not something he's ruling out down the road.