For 40 minutes on Saturday night, the Lakehead Thunderwolves men’s basketball team was cheering for Carleton.
0
Mar 8, 2010 4:42 PM By: Leith Dunick 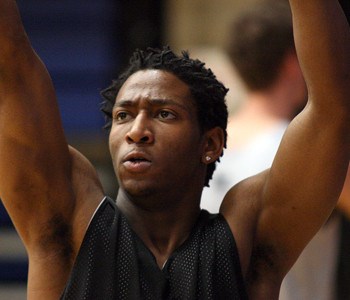 For 40 minutes on Saturday night, the Lakehead Thunderwolves men’s basketball team was cheering for Carleton.

The Wolves, who earlier that night dropped an 87-66 decision to the Windsor Lancers in the OUA West final, needed a Carleton win to keep their national championship hopes alive.

The Ravens, as the host, have an automatic berth at nationals. But by winning the OUA East, they also earned one of two OUA berths at the eight-team tournament. Thus their 78-64 win Saturday over the Ottawa Gee-Gees gave the Wolves a second life.

The Wolves will meet the Gee Gees on Saturday night in the nation’s capital, a one-game winner-take-all scenario that sees the winner move on to nationals and the loser go home.

Lakehead’s second-year guard Greg Carter, a native of Ottawa, said it was a tough road loss, but one that they think they can overcome.

"We really wanted to have that OUA West final championship under our belt, and hang our first championship banner in the history of Lakehead, but we didn’t execute enough to get the win," Carter said, just before coach Scott Morrison put his troops through an extended shooting drill on Monday afternoon.

But they’ll take what they can get, he added.

"We’re thankful God gave us a second chance to go to nationals. Nationals are the biggest thing of the season for us. We’re really focused on executing and coming out hard in Ottawa," he said.

The Wolves have met the Gee Gees once already this season, and the result wasn’t pretty. Coming off a stunning three-point win over Carleton, the Wolves were blown out 93-56 by Ottawa the following night, at home nonetheless.

Carter, who averaged 6.6 points per game, said the Wolves let Ottawa build too big a lead in their first encounter, and fell flat-footed trying to pull their way back into the contest.

"I think if we just do the little things, we’ll be all right," said Carter, who plans to have a full contingent of family and friends in the stands on Saturday.

Forward Brendan King, who hails from Pettawawa, a military town located an hour or so northwest of Ottawa, said the team is going to make the most of the unexpected opportunity.

"We feel as we’ve been given a second chance to come out and really give it all we can. So this weekend we’re not going to leave anything behind," he said.

A slow start is out of the question, he added.

"Definitely not," he said. "Ottawa’s a good team and so is Windsor. They’re not going to come out soft on us. They’re going to come out trying to win. Everyone wants to go to nationals, right? So we just have to have a good week in practice, put it all together and hopefully go down there and get a win and make nationals."

The prize, however, is the great equalizer, and in a one-game affair, anything is possible. Morrison said they have to eliminate the mental mistakes, which come with inexperience, but that man-for-man the team has earned mention among the top squads in the country.

Now they have to go out and prove it once and for all, against an athletic club that will be gunning for them from the get go.

"We think we deserve to be (at nationals). Ottawa is saying the same thing. We’re just going to try to keep it a little bit simpler this week and have a great game on Saturday."