THUNDER BAY – Nigel Romick says he’ll always remember how his time at high school helped him become a professional football player. Now his school has a way of remembering their famous alum. The former St.
Dec 21, 2015 3:43 PM By: TbNewsWatch.com Staff 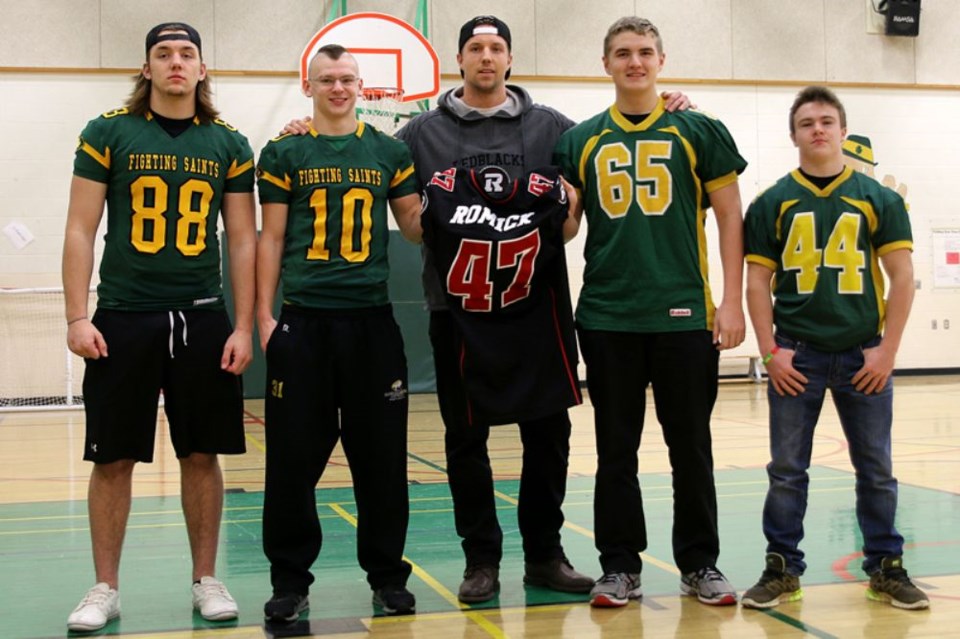 Now his school has a way of remembering their famous alum.

The former St. Patrick High School gridiron star visited his alma mater Monday afternoon to present the school with a game worn jersey from his second Canadian Football League campaign with the Ottawa Redblacks and meet with current Saints players.

“It’s really important for me coming back to St. Pat’s where it all started to give back to the kids and see them and talk to them, to inspire them that they can achieve goals,” Romick said.

The 24-year-old almost never ended up playing football, deciding not to play in his first year of high school. He joined the Saints in his Grade 10 year and admitting he had no idea about the rules of the sport.

St. Patrick coach Dave Battistel, who organized the visit, remembers when the young Romick first stepped on the practice field.

“I don’t think that first time we ever saw him on a field we would ever think down the road he would end up playing in the CFL and being as successful as he was,” Battistel said.

But he proved to be a quick learner, using his size, strength and what Battistel describes as “natural football sense” to dominate at the city level and attract attention from university scouts across the country.

He eventually landed on the east coast at St. Mary’s University and excelled, leading to him being selected in the 2014 CFL Draft by Ottawa. He dressed for 16 games his rookie year and all 18 this past season, recording 19 special teams tackles.

This season the Redblacks shocked the league, taking the East Division by storm and marching all the way to play in the Grey Cup in only their second season.

That week before the game is something he’ll never forget.

“It was a real surreal moment. We were in Winnipeg all week for the media, dinners and awards so it was great to be there,” he said. “We went worst to first in the East. After winning each game we came together a lot better and came together as a team.”

Grade 12 student Kellen Steudle, 17, said it means a lot to see Romick’s accomplishments and remember he once sat in the same locker room, did the same drills in practice and played on the same field.

“It’s very inspirational, coming from the same roots and the same school with how far he went. It shows what kind of potential you could have,” Steudle said. “It’s a big deal, playing professional football.”

Battistel said having Romick as a role model telling the students to continually pursue goals and always work to get better has a significant impact.

“If you work hard and dedicate yourself you can be successful. I think it’s huge for students in our program to see that,” Battistel said. “I think it means a lot for them to see and hear it from somebody who actually experienced it and is still experiencing it. I think it carries 10 times more weight than we could mention to them.”

Ottawa recently picked up the team option on Romick’s contract, meaning the defensive lineman will likely suit up in a Redblacks jersey again next season.

Romick is already looking ahead to the 2016 calendar and has identified his next set of goals.

“I told myself next year I’m going to get over 20 special teams tackles, so I’m going to get that,” he said. “I just want to watch film, get in the best shape for training camp and try to be a rotational player at defensive end.”