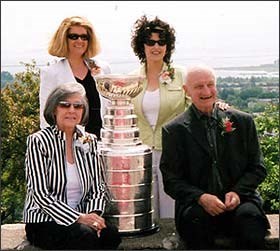 Benny Woit (right) and his family with the Stanley Cup at Hillcrest Park (Hockey Hall of Fame photo).

He also spent time with the Chicago Blackhawks.

In his career Woit appeared in 333 games, scoring seven goals and 26 assists. He also played in 41 playoff games, collecting two goals and six assists in 41 games.

Originally scouted by the Toronto Maple Leafs and recruited with their Ontario Hockey Association team, he wound up with the Red Wings organization instead. He won a Memorial Cup in 1947 with the St. Michael’s Majors, then the following year led his hometown Port Arthur Bruins to a Memorial Cup win.

Woit made his Red Wings debut in 1950-51, playing two regular season games. He was a regular the following fall and scored a goal and an assist in the 1952 semifinal against the Toronto Maple Leafs, according to the Hockey Hall of Fame.

Woit spent 18 seasons playing professional hockey, retiring in 1966 after a season with the Jersey Devils of the now defunct Eastern Hockey League.

"I was fortunate,”  Woit told the Red Wings Legends blog. "I just happened to be with the right guys I guess. Guys like (Ted) Lindsay, (Gordie) Howe and (Terry) Sawchuck ... you couldn't go wrong with that bunch."

According to the blog, after retiring Woit returned home to Thunder Bay, where he worked as a longshoreman.

Benny, his wife Julie and daughters Debbie and Denise moved to Thunder Bay several years ago.

He died on Wednesday in Richmond Hill, Ont.