There’s no question Trevor Gamache is a great junior A player. Gamache won the Superior International Junior Hockey League scoring title this season with 80 points, the second time he turned the trick in as many years.
0
Mar 5, 2010 11:03 PM By: Leith Dunick 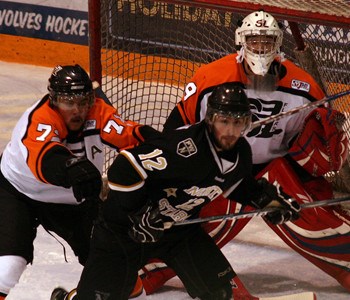 Gamache won the Superior International Junior Hockey League scoring title this season with 80 points, the second time he turned the trick in as many years.

But after scoring 103 points in just 49 games in 2008-09 for the Fort William North Stars, including a league-high 41 goals, the Longlac native suddenly went silent when his team needed him the most. Gamache was held goalless in a dozen SIJHL playoff games, only managing to collect eight assists, and the North Stars nearly paid the price, needing seven games to knock off the now-defunct Schreiber Diesels in the SIJHL semifinal.

On Friday night at Fort William Gardens, the 20-year-old veteran struck twice, including a goal 26 seconds into the contest, leading the North Stars to a 4-1 lead over the visiting Sioux Lookout Flyers in their  opener of the league’s new round-robin playoff format.

“I know last year I had a great regular season, but my playoffs weren’t the greatest, everybody knows that. I’m hoping to lead my team these playoffs. I play on a great line, we know we have a lot of pressure on us and hopefully we can take our team to the Dudley (Hewitt Cup) and redeem ourselves from last year and go to the (Royal Bank Cup),” said Gamache, who completed a three-point night with an assist on Ryan Magill’s second period tally, which at the time put Fort William up 3-0.

North Stars coach Todd Howarth said he’s counting on Gamache to provide the offense he needs in the postseason. But just because he wasn’t scoring in last year’s playoffs, doesn’t mean he wasn’t contributing, Howarth added.

“He never let his defensive game hurt last year. This year was good to see him get off to a good start, but if you guys remember, he did score a pretty big goal in the semifinal of the Dudley last year to get going for us. He’ll be fine. It’s pressure and these guys all want to win. They know what we want,” Howarth said.

Howarth put Gamache on a line with Magill and Jordan Davis about two-and-a-half weeks ago, his way of shuffling things around as the playoffs approached.

But it remains to be seen how the league’s new playoff format will work out.  Under the new format, the fourth and fifth-place teams play a traditional seven-game series to determine the fourth seed in the semifinal. The top three teams play a round-robin tournament, with each team playing the other two twice. The team that emerges on top has its choice of any of the three remaining teams as its semifinal opponent.

It’s a system introduced from Saskatchewan, and one that Howarth is OK with.

“I don’t have a problem with it. No matter what, we don’t lose our home ice throughout the playoffs, because we finished first overall. It means you’re not sitting around. We would have been sitting around in the first round this year. We did that last year and I felt that really hurt us when we went up against Schreiber. We were a step behind,” Howarth said.

On Friday night, the opposite was the case.

Gamache beat Peter Emery before the small crowd of 75 or so had fully settled into their seats, then pounced again, this time shorthanded, at 7:44 of the first, taking a breakaway pass and powering it through the Sioux Lookout goaltender.

Magill went five-hole on Emery 5:19 into the second to make it 3-0, then seven minutes later Chase Dobranski brought the Flyers to within two again, firing a shot from just off the right-wing boards that beat Guillaume Piche, the SIJHL’s February player of the month.
Travis Savard netted the game’s final goal midway through the third.

Gamache said it was important to get that first win, knowing they only have so many chances in such a short tournament.

“It was huge. We knew those guys had to come out and win today. It was critical to get a good start. The first shift we scored and that was huge. We could tell after that they were just icing the puck. Dryden got their first win, so we had to get our first win,” Gamache said.

The North Stars and Flyers meet again on Wednesday in Sioux Lookout. In between the North Stars host Dryden on Saturday night at the Gardens.