Amber Peterson is living proof that freestyle skiers can make it out of Thunder Bay. On Thursday she gave up a portion of her Christmas holiday to help the next generation learn what it takes to become an Olympic level skier.
Dec 30, 2010 3:25 PM By: Leith Dunick 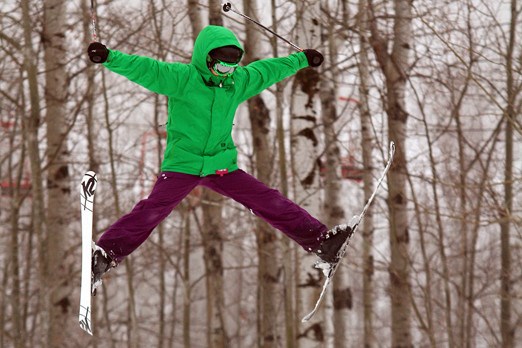 Members of the Thunder Bay Freestyle Ski Club get a taste of air at Loch Lomond Thursday afternoon. (Leith Dunick, tbnewswatch.com)
Amber Peterson is living proof that freestyle skiers can make it out of Thunder Bay.

On Thursday she gave up a portion of her Christmas holiday to help the next generation learn what it takes to become an Olympic level skier.

Peterson, an aerial specialist who competed at the 2006 Winter Olympic Games, spent much of her day focusing on teaching and training the Thunder Bay Freestyle Club’s few female members, encouraging them to participate in a sport that has so much to offer, she said.

The 28-year-old, who is studying to be a nurse in Alberta, said giving back is what sport is all about. That and skiers never stop learning, so even though she’s retired she is picking up a new trick or two to bring back home.

“It feels good to come out and ski with the younger kids. They’re showing me just as much as I can show them,” the Thunder Bay native said. “They’re skiing backwards and stuff. Aerials were my thing, so it’s kind of interesting to come here and they’re kind of teaching me the ropes.”

Being out on the hill always brings out the competitive spirit in Peterson, who began her World Cup career in 1999 and earned a podium berth at Lake Placid, N.Y. in 2006, her first and only World Cup medal during her lengthy career.

It brings back plenty of memories, too, she said.

“Definitely being outside every day was great. I miss it a little bit, but I like change, something new in life,” she said.


Peterson offered up plenty of tips and techniques, but she said the most important thing for young freestyle skiers is to find something they really like to do, whether it’s skiing or knitting.

“It’s what’s going to get them to the top. Whether it’s sports or horseback riding, just do what you want to do. Then you’re going to want to do the work to make that step further and get any further,” she said.

Twelve-year-old Abby Proteau hasn’t officially joined the Thunder Bay Freestyle Club, and isn’t sure the sport is for her, but she came out to give it a shot anyway, on a warm afternoon more suited for April than the day before New Year’s Eve.

Having someone like Peterson show her the basics didn’t hurt, she said.

“It’s really cool. It’s someone with really great talent coming to show us how to do it,” Proteau said.

Jonathan Kroker, attracted to the sport for both fun and competition, said it was an honour to learn from one of the best the city has ever produced.

“She’s a professional and she can teach us a lot from our experiences,” he said. “I’ve been learning a bunch of basics this morning and hopefully will excel this afternoon.

For clinic organizers, it was a chance to promote the sport to the wider community, particularly the female set, who haven’t gravitated to freestyle skiing like their male counterparts.

“I think our club is about 99 per cent males, so we’d like to see some more girls on our team. We’re also trying to do more grassroots development for freestyle skiing,” said Lorella Piirik, TBFSC president.

“It’s a thrust with Freestyle Skiing Ontario, that we need to get more kids in the younger ages, starting at a young level, building good ski skills so that when they get to the older ages they have the skills to do more advanced maneuvers.