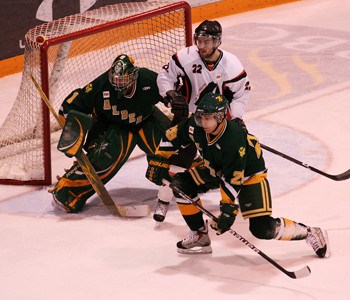 Alberta may have been down, but as the UQTR Patriotes quickly learned, they’re rarely out.
The Golden Bears scored four unanswered goals to erase an early 2-0 Patriotes lead, cruising  to a 4-2 win in the opening game in Pool A play at the Cavendish University Cup at Fort William Gardens on Thursday night.

Jesse Gimblett scored a pair of goals to spark the comeback, the first on the power play with 39 seconds to go in the first, the second that tied the contest 2-2 at 12:34 of the middle stanza.
He said it’s nice to win their opener at nationals for a change, something that’s escaped them in their recent appearances.

“It’s huge. The last two years we weren’t able to get the first win here. We were always coming from behind. I think this year we wanted to get that first one, get us over the hump. It took us about a period-and-a-half to get our legs going, and I think everyone’s just starting to believe in themselves,” Gimblett said.

Yes, they faced adversity in the early going, but Gimblett said, it should have been expected, given the calibre of their opponent.

“Let’s give them some credit. They were the No. 3 seed all season. They had a slip in the playoffs. We didn’t see them as the No. 6 seed coming into this tournament. We knew this was going to be one of, if not the top competition for us in this tournament,” Gimblett said. “I don’t think that we were expected to win. We knew what we were in for.”

It wasn’t the start he was hoping for, said Golden Bears coach Eric Thurston, who changed the forecheck after his team fell behind by a couple, adjusting on the fly to a 1-2-2 formation to combat an opponent that was overpowering them through the first 19 minutes of play.

“That helped to have a couple guys back (and) turn pucks over in the neutral zone. I just didn’t think we got the shots. We talked about getting more shots to the net and knowing that it might have to be a little bit ugly, a little bit greasy in this game, that we’d have to find a way to win or make one,” Thurston said.

Thurston said in the first period he saw a team that wasn’t necessarily playing to win, but one that was playing not to lose.

The Patriotes caught the Golden Bears by surprise, he said, but a late-first period Alberta goal helped turn things around.

“You really have to give Three Rivers credit. They came out with lots of jump. We were able to weather it. I think the power play goal late in the first was just huge. Rather than going in 2-0, we go in 2-1 and that was just a big, big goal,” Thurston said, emphasizing they did not deserve the number six seed that fate labelled them with at the CIS championship.

The news wasn’t so good on the UQTR side.

With one loss, they have to beat host Lakehead on Friday night or their season is done.
UQTR left winger Etienne Bellvance-Martin, who opened the scoring on the power play at 17:27 of the first, beating Alberta goalie Travis Yonkman 68 seconds before teammate before teammate Felix Petit lifted a wrist shot over Yonkman’s shoulder to make it 2-0, said it won’t be easy, but they think they can do it.

“We expect a big game tomorrow. We know they have a large attendance. For both teams it will be a big game. It’s their opening, and for us it’s do or die. I think both teams are going to be ready,” a dejected Bellavance-Martin said.

With the game tied 2-2, Alberta kept the pressure valve open and peppered UQTR goalie Jean-Christophe Blanchard in the second and third, firing 26 of their 34 shots in the final 40 minutes.
It was Brian Woolger who got the eventual winner, picking up a rebound on a deflected shot and sliding it past Blanchard.

Alberta played a disciplined brand of hockey all night long, taking just two minor penalties. UQTR drew more attention from the referee, giving up seven man advantages, including three in the third period when they needed to score to crawl back into the game.

Ian Barteaux wrapped up the Alberta scoring, netting his first of the tournament 90 seconds into the third.

Alberta , which now boasts a 6-2 overall record against the Patriotes, earned a day of rest and will meet Lakehead on Saturday night in the round robin finale. UQTR and Lakehead will play on Friday night. Both games are at 7:30 p.m.