Michael Somppi knows the Lappe Nordic Ski Centre trails like the back of his hand.
Jan 4, 2011 5:02 PM By: Leith Dunick 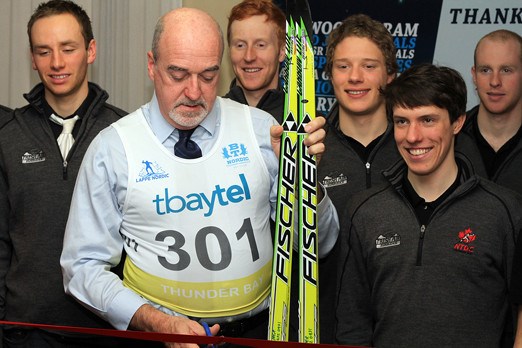 Mayor Keith Hobbs cuts the ribbon at the official news conference for the Haywood Noram World Trials Tuesday. (Leith Dunick, tbnewswatch.com)
Michael Somppi knows the Lappe Nordic Ski Centre trails like the back of his hand.

He’s hoping to use that to his advantage this weekend at the Haywood Noram World Trials, where the Thunder Bay skier is seeking one of four spots on the Canadian national under-23 cross country ski team.

Somppi, who won a pair of silver medals at the 2006 Canadian National Championships held in Thunder Bay, says that’s as much of a confidence booster as he could ask for.

“With good past history of big events here, I’m pretty excited to try to repeat it,” the 22-year-old said.

“It’s definitely going to be a challenge,” he said. “I’m competing against four national team members who are under 23, plus a few others who are very talented and fast skiers. So it’s not easy. You have to be on your ‘A’ game, and winning is the best way to go. So you’ve just got to go for it.”

Somppi, who finished third in the 50-kilometre classic mass start race at the 2010 national championships, is in his fourth year on Thunder Bay’s National Development Centre team, one of four in place in Canada.

He sees the under-23 trials as his next step in reaching his ultimate goal, a spot on Canada’s senior men’s squad.

“It would be a huge help, because going to the world under-23 championships and doing well there is a good way to make the national team. It’s the same way that all of the guys I’m competing against have made it in the past,” he said.


“It’s a big event for me. It’s a way to get onto the national team next year and get some experience.”

It could also land him a spot on Ontario’s Canada Winter Games team, which will compete in Halifax next month.

It’s a big weekend for most of the country’s cross country skiers, with the senior distance trials scheduled for Thursday and an official Ontario Cup Race in the environmentally friendly mix as well.

It makes one less thing to worry about with so much on the line, he added.

“The senior men’s is a big race for us on Thursday. It’s kind of a winner-takes-all kind of deal on Thursday for the senior world championships,” he said. “So that’s the big focus, but there are two more races for seniors, and those all go toward the Nor-Am spot which I’m looking to defend this weekend.”

NDC Thunder Bay coach Eric Bailey called it a very tight competition, adding he has high hopes for locally trained skiers, based in part by their performance this season.

“Definitely a few of our athletes have shown they are in the fray and in competition for some of those world championship spots,” he said.

The event is also unique in its environmental approach, with organizers saying they’ve made every effort to make it a litter-free green event. In addition to recycling bins and composting, they’ll also be using compostable dishes, cups, plates and cutlery made from potatoes.