The Saint Mary’s Huskies weren’t making the same mistake twice. A year ago, after building a lead against the Western Mustangs, the Huskies fell apart in the final 20 minutes, surrendering five goals and a shot at a national title.
Mar 27, 2010 6:36 PM By: Leith Dunick 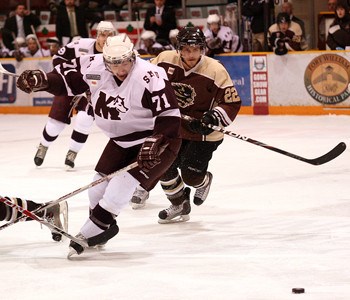 A year ago, after building a lead against the Western Mustangs, the Huskies fell apart in the final 20 minutes, surrendering five goals and a shot at a national title.

On Saturday they kept the pressure on after the second intermission, allowed the Manitoba Bisons just six shots in the third and clinched a berth in Sunday’s Cavendish University Cup final with a 5-0 whitewashing of their Canada West cousins.

But as gratifying as the victory was, it’s not nearly enough for fifth-year forward Marc Rancourt, the 2009 CIS MVP.

“Certainly we had a Saturday nightmare last year, but we didn’t come here to win on Saturday. Ask us again tomorrow night, and see how we answer that question,” the Gloucester, Ont. native said.

The Huskies will be making their first appearance in a national hockey final since 1973, when they ended a Buffalo Bills-like run of four straight championship games with zero titles to show for it thanks to the Toronto Varsity Blues.

Exercising a blanket forecheck and paralyzing 30-shot attack, Saint Mary’s made an easy afternoon of it for rookie goalie Neil Conway, who faced just 19 shots, only a couple any threat to beat him.

“We just played our game,” said coach Trevor Stienburg. “It’s pretty obvious we had 20 guys that came to play tonight from the drop of the puck. They executed everything, our game plan, they took our blueprint, laid it all on the line and they put a lot of passion in there.

“We played as physical as we possibly could, dumped the puck and tried to tire them out as much as we could.”

Stienburg gave plenty of credit to Manitoba, which opened the University Cup on Thursday with a come-from-behind 5-4 win over McGill.

“I think in a tournament like this, we’re not five goals better than them,” he said. “I think what happens is you get up a couple and we gained the momentum and they got frustrated at times. We rushed them and tried to take time and space so they couldn’t gain any momentum and I think our guys were committed instead of trying carrying the puck in and taking some higher-risk plays, we were committed to just dumping the puck in and not giving them any momentum.”

The Bisons, who got a taste of what it takes to win a national title, will have to settle for knowing few teams come in and win a CIS title the first time around.

“We know what it takes to get here now. What we’ll come away with from this experience is a hunger to get back,” said Manitoba coach Mike Sirant, who brought his club to the CIS final for the first time in five years.

Bisons captain Calin Wild said it’s clear experience on the national stage goes a long way to determining a team’s success at a tournament like this, and ultimately the Huskies had more of it this time around. That won’t be the case for Manitoba again, the Winnipeg native said, thoughts of a repeat visit at next year’s tournament in Fredericton, N.B. a year from now already creeping into his head.

“Obviously it’s their second time around and they know what it takes to win here. I know our room’s going to be hungry at training camp now that we’ve been here,” Wild said.

Cody Thornton broke open a scoreless game at 9:55 of the first, punching the puck past Manitoba goalie Steve Christie. Then, with less than three minutes to go in the opening period, Cam Fergus fired a wrist shot into the twine and SMU took a 2-0 lead into the break.

The Huskies didn’t wait long to get going in the third, when defenceman Andrew Hotham pinched in from the blueline, corralled a rebound and beat Christie at the 31-second mark. Colby Pridham, the Huskies leading playoff scorer, made it 4-0 before the period was out, and the rout was on.

Manitoba had its best chance to score in the final three minutes of the second when rookie forward Blair Macaulay broke free and strode in alone on Conway, only to see his shot kicked aside at the last possible second. Fergus rounded out the scoring with his second of the day in the third.

“It was obviously difficult,” Wild said. “There were not a lot of chances given out.”
Saint Mary’s will take on the winner of Saturday night’s Lakehead/Alberta tilt in Sunday night’s final.