Ilya Kovalchuk and Ryan Johnson aren’t usually mentioned in the same breath. The former is a freewheeling, goal-scoring machine who happens to be the toast of the NHL’s free agent world this summer.
Jul 16, 2010 2:55 AM By: Leith Dunick 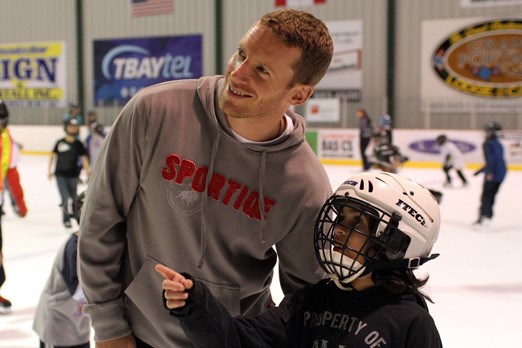 Free agent Ryan Johnson makes a youngster's day on Thursday, posing for a picture at the Easter Seals skate at the Tournament Centre. (By Leith Dunick, tbnewswatch.com)
Ilya Kovalchuk and Ryan Johnson aren’t usually mentioned in the same breath.

The former is a freewheeling, goal-scoring machine who happens to be the toast of the NHL’s free agent world this summer. The latter is a shot-blocking sensation who’s never scored more than seven goals in a season.

But until Kovalchuk signs his name on some team’s dotted line, be it in Los Angeles, New Jersey or somewhere in between, guys like Johnson have to wait and see what’s left in the pot for them. Kovalchuk and his agent are said to be looking for a contract in the 10-year, US$10-million range, and any team that thinks they have a chance at him is counting their pennies closely at this stage of the free-agent game.

Smart thinking says things will begin to fall into place once the Russian sniper finds a home. At some point that means the 34-year-old Johnson, ranked 19th on Yahoo Canada’s list of available free agent forwards not named Kovalchuk, will start getting offers.

“It’s funny, everything’s kind of been at a standstill because of this Kovalchuk deal. I know everybody in the business and in the media is kind of dumbfounded about how it’s played out. There seems like there’s a lot of hesitancy among everybody until he shores things up on where he’s going, because a lot of dominoes are going to fall after him,” Johnson said Thursday, lacing up his skates for the annual Easter Seals skate at the Tournament Centre.

The Thunder Bay native is coming off a disappointing season, one that saw him miss 24 games and score just once in the 58 he did play in with the Vancouver Canucks. Johnson, who played on broken bones in both feet in 2009-10, went down on April 4 with a broken ankle and was expected to miss the remainder of the season.

He returned to play four postseason contests, which could wind up being the last games he plays in a Vancouver uniform.

At this point, however, he’s not ruling anything out.

“We’re speaking still with Vancouver, but with many other teams as well, and we’ll see what happens over the next little while,” Johnson said.

“It’s been very general, the conversations that we’ve had (with the Canucks). To say one way or the other, I don’t know. It’s exciting. It’s good to speak with other teams and see what else is out there. Something, I’m sure, will happen over the next little bit here.”

Vancouver has been active in the offseason, but with $63 million committed to payroll in 2010-11, and the salary cap expected to be set in the $59 million range, the Canucks look to be salary dumpers, and might not have room for Johnson, who made $1.1 million last season, his second in Vancouver.

But after signing Dan Hamhuis to a seven-year deal, trading for Keith Ballard and signing Manny Malhotra, they’re rumoured to be shopping fellow blue-liner Kevin Bieksa, a deal which would likely still leave the Canucks over the league-imposed limit.

Losing Johnson could be a costly decision, especially in the dressing room.

A consummate team player, Johnson’s biggest disappointment last season wasn’t his personal woes, but instead the inability of the Canucks to get it done when it counts. For the second straight year Vancouver was eliminated from Stanley Cup contention by the Chicago Blackhawks, and even though the Hawks went on to win the NHL championship, it doesn’t soften the blow, he said.

“Not enough of our players learned their lesson the first time. And again, a series that we were dominating and could have taken control of very early, again they came back and got us in the end,” Johnson said.

“That’s two years in a row. The first year, in Game 4, we were up 1-0 with a minute left and going home up 3-1 as opposed to 2-2. I don’t think we had the maturity to handle it the right way. I thought coming round the second year that we’d learned our lesson, winning the first game and being up in the second game.”

Instead they fell 4-2 in Game 2, lost the next two contests and trailed 3-1. The Canucks rebounded with a 3-1 triumph in Game 5, but were ousted from contention easily, falling 5-1 in Game 6.

“We lost our focus for a few games and it was kind of what broke the series for us,” he said.

Johnson has 37 goals and 79 assists in 667 games spread between Florida, Tampa Bay, St. Louis and Vancouver.