Former NHLer Mike Busniuk heads the 2012 inductees class into the Northwestern Sports Hall of Fame. Busniuk, who spent two seasons with the Philadelphia Flyers in the early 1980s, will be joined at a Sept. 29 ceremony by water-skier Terri Gibbons.
Jul 24, 2012 4:54 PM By: Leith Dunick 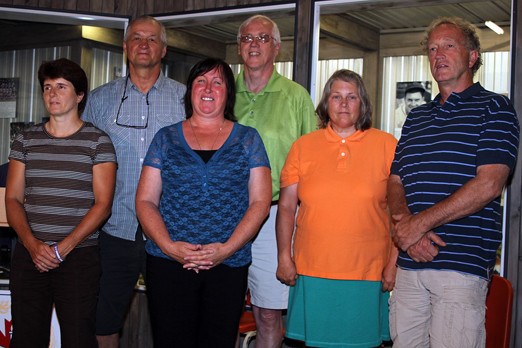 Busniuk, who spent two seasons with the Philadelphia Flyers in the early 1980s, will be joined at a Sept. 29 ceremony by water-skier Terri Gibbons.

Hockey coach Alex Dampier, who spent 25 years introducing the Canadian style of play in Great Britain, is one of three builders being inducted this year. Curling coach Dick Henderson and U.S. college hockey coach Bill Selman also got the nod.

Busniuk, already in the hall of fame as part of the 1966 Fort William Americans Senior Little League championship team, the 60-year-old won four American Hockey League championships with Nova Scotia and Maine, and played in the 1980 Stanley Cup final against the New York Islanders, a series the Flyers lost in six games.

It’s always an honour to be recognized, said Busniuk, a recent inductee into the Binghamton Hockey Hall of Fame, where he spent more than 10 years behind the bench as an assistant coach.

“For me, whenever I’m away from Thunder Bay, people get mad at me because all I talk about is Thunder Bay,” said Busniuk, a teacher at Dennis Franklin Cromarty High School and an assistant coach under Joel Scherban with the Lakehead Thunderwolves hockey team.

Busniuk, who retired in 1984, said it was great coaching and great teammates who helped him make it to the NHL.

“I was just one of the lucky ones who got to go play somewhere,” he said.

Gibbons was equally humbled to hear the hall call.

Over her career, Gibbons won 25 national medals and won five overall Canadian championships between 1985 and 1989.

Dampier, who grew up in Nipigon, was a pretty good hockey player who led Charlottetown to the Centennial Cup final, and spent playing time in the Eastern Hockey League and International Hockey League, before moving overseas to wind up his playing career and turn to the coaching ranks.

Henderson, on the other hand, is synonymous with the sport of curling, where he truly left his mark coaching curlers from high school to the world stage.

Behind the scenes he also helped organize the 1996 Scott Tournament of Hearts held in Thunder Bay and more recently coached the Northern Ontario entry at the 2010 Canadian Junior nationals.

Selman began his coaching career after winning a national title as a player with the University of North Dakota, taking over behind the bench in 1964. He also coached at the University of Minnesota-Duluth and St. Louis University, while helping to found the Central Collegiate Hockey Association.

Hall of Fame executive director Diane Imrie said the selection committee had tough decisions to make, with so many qualified athletes still awaiting induction – and plenty more to come.

The seven athletes and builders honoured were no-brainers, however, Imrie said.

“We have a fantastic crop this year. If you look at the Canadian championships, you look at Mike Busniuk playing an amazing amount of hockey, doing extraordinary well and going on to be a fantastic coach. It’s just an incredible breadth of sport.

“We have national champions in so many different sports in this area. And we get the opportunity to honour them.”

The Sept. 29 induction dinner at the Valhalla Inn is open to the public. Tickets can be purchased by phoning 622-2852 or by dropping by the hall of fame, located next to city hall on May Street, Tuesday through Saturday between noon and 5 p.m.