His knees may be shot and surgically repaired, but it hasn’t stopped four-time world champion Kurt Browning from continuing his figure skating career – albeit in a much less competitive form.
Dec 17, 2010 1:41 AM By: Leith Dunick 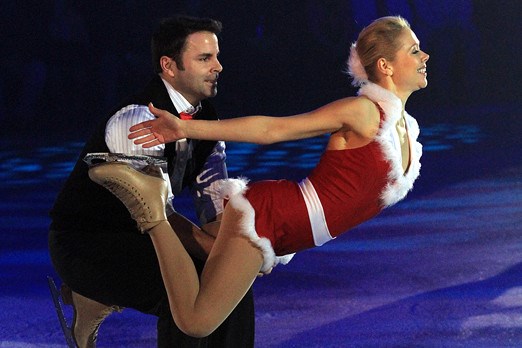 Violetta Afanasieva (right) and Pete Dack perform at Celebration on Ice Thursday at Fort William Gardens. (Leith Dunick, tbnewswatch.com)
His knees may be shot and surgically repaired, but it hasn’t stopped four-time world champion Kurt Browning from continuing his figure skating career – albeit in a much less competitive form.

The 44-year-old Browning, who joined the ice show circuit 16 years ago, after three times representing Canada at the Olympic Games, says performing solely for the crowd, and not a panel of judges, makes life a whole lot easier.

“Competing is like peaking for a moment, and everything is riding on that moment. When it happens it lasts almost your whole life, that high, that memory, that moment. You become that person. As a professional skater, when you do a show like this, it’s not as high. The difficulty is not as there, the rewards are not as there, but it’s a much longer feeling. So this is almost like marriage,” said Browning, who performed in Thursday night’s Celebration On Ice at Fort William Gardens, alongside skaters like Olympic champions Jamie Sale and David Pelletier and Olympic bronze medallists Jeffrey Buttle and Joannie Rochette.

A 10-year member of the Canadian Figure Skating Hall of Fame, the Alberta-born Browning has been a household name for more than two decades. He said he looks forward to events like Celebration On Ice, because it gives he and his fellow skaters a chance to connect with thousands of fans who cheered from afar during their heydays.

“You become real. When you’re on TV, it doesn’t matter what’s happening. Somehow there’s this aura of that didn’t really happen because it’s in the box. When you go live, you buy a ticket, you take time out of your schedule, everyone gets in the car and you sit there and actually see it, the skaters become real people,” Browning said, stretching in the Gardens hallway, trying to stay limber for the Casablanca-inspired number created for him by two-time Olympic silver medallist Brian Orser.

“And I think it makes it more real for the young skaters (in the audience), to see it live, to meet us and shake our hands and they’ll know that it can happen.”

Browning said he was about 10 the first time a skating show came to his Rocky Mountain, Alta. hometown.

It set him on a path to glory and he hasn’t looked back since.

“He did a two-footed double-axel and I’d never seen one live before in my life. And I went, ‘Oh, hmmm.’ The very next day I started thinking about doing it. So it is important.”

That puts the pressure squarely on Orser’s shoulders.

The 10-time Canadian champion, known as Mr. Triple Axel during his lengthy career, said he started thinking about the holiday-themed show in July, listening to any number of Christmas songs to get a feel for the show he’d create.

“Thank goodness for iTunes, so I could start researching this stuff. I’ve choreographed this show before, a few times, but I was always skating in it. This was really the first time to come up and choreograph it and really just enjoy it,” Orser said.

“I think it’s sometimes a bit more difficult for the cast members. Because usually when I’m choreographing it I’m skating with them. When I’m in the show, all eyes are on me because I’ve made the stuff up. So they’re kind of on their own out there tonight, but they did a great job, and it’s fun. It’s a good group.”

The show, which also includes Cynthia Phaneuf, Violetta Afanasieva and Pete Dack and Kirsten Moore-Towers and David Moscovitch, will be in Sault Ste. Marie on Friday and Sudbury on Saturday.