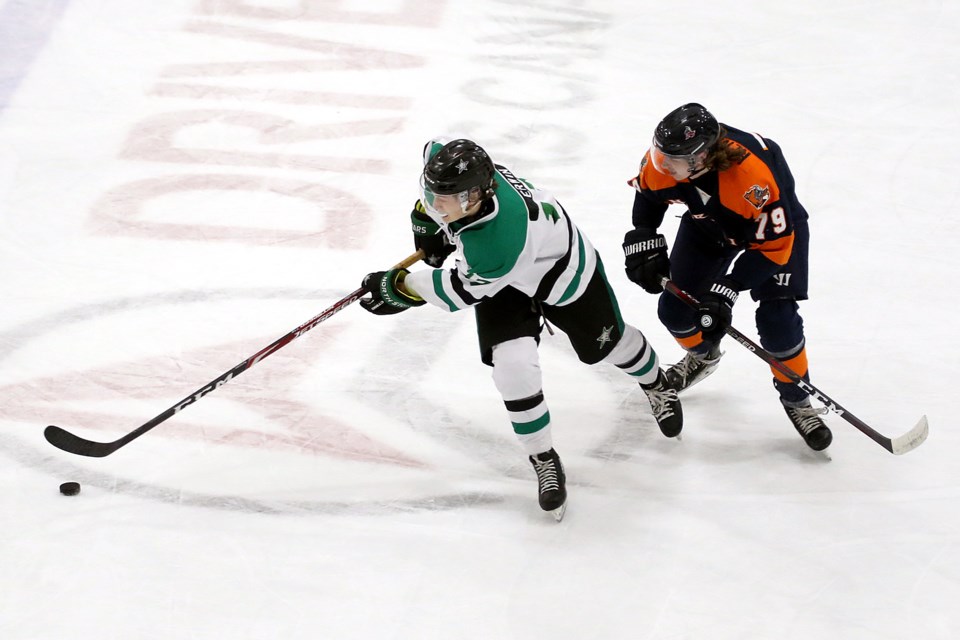 THUNDER BAY – It wasn’t much of a weekend for the Thunder Bay North Stars defensive corps.

The Stars, who entered play Friday ranked No. 7 in the Canadian Junior Hockey League, are the top defensive team in the league, but looked anything but in dropping two in a row to a Norskies team hot in pursuit of their first-place rival, and three straight overall.

“It was a rough weekend,” said Thunder Bay captain Logan Mihalcin, promising the team will figure it out in practice this week and come back next weekend with a pair of wins.

The Stars hit the power play two minutes into the contest, but the man advantage was wiped out 28 seconds later and the Norskies made the most of their brief power play, Mason McIntosh potting his 11th goal of the season past Thunder Bay goaltender Seth McKay.

Two power plays and two power-play goals later and the rout was on.

Connor Kalthoff doubled the Thief River Falls lead at the eight-minute mark of the first and defenceman Zach Ross, who finished with a goal and three assists, added another five minutes into the second for a 3-0 Norskies lead.

“It was very disappointing. Last night’s game we pretty much gave up. We had a great start, obviously, and then let off the gas. With 14 minutes left we were up 6-2 and they came back and then came out a little bit flat (tonight),” Leishman said.

“We still peppered the goalie. We had (47) shots I think. It was a good battle at the end of the night, but it’s got to be a full 60 minutes if we’re going to win these hockey games.”

The third goal led to the Stars yanking starting goaltender Seth McKay, who was good on 14 of 17 shots, replaced by Jordan Smith.

North Stars Rob DeGagne said the team has to play better team defence – and not let up on special teams.

“Normally we have a very good penalty kill. It didn’t matter what happened. They got a shot on net and they had a guy standing right in front of the net, right in the right spot – rebound and it was right in the net,” DeGagne said.

“We didn’t tie up our guys good enough. We didn’t have a good weekend defensively and we know that. But there’s no sense dwelling on it. We’ve just got to go out and be better next time.”

Nick Harder and Bryce Johnson added even-strength goals for the Norskies in the second to up their lead to 5-0, before Jacob Brown finally got the North Stars on the board with a tap-in goal with four seconds left the in the period that ended Joshua Seeley’s shutout bid.

Jonah Henderson and Nikolas Campbell traded goals early in the third, Thunder Bay’s Alex Erwin wrapping up the scoring with his third of the season late in the period.

DeGagne pulled his goaltender after Erwin’s goal, but neither team found the back of the net.

Wolves repatriate pair of highly ranked players
Jul 2, 2020 5:08 PM
Comments
We welcome your feedback and encourage you to share your thoughts. We ask that you be respectful of others and their points of view, refrain from personal attacks and stay on topic. To learn about our commenting policies and how we moderate, please read our Community Guidelines.