Evan Nicholas scores the lone goal of the second period to break open a 2-2 contest the tally proving to be the game-winner.
Oct 5, 2019 11:46 PM By: Leith Dunick 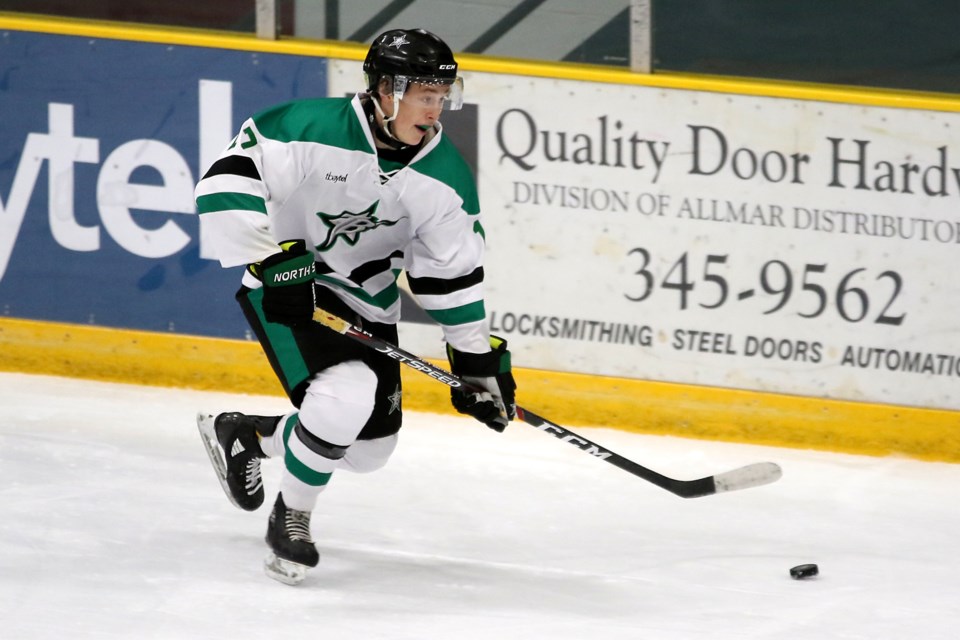 Coming off a 10-goal campaign in last year, the 20-year-old Thunder Bay North Stars forward plays the game of hockey with an edge, grinding it out in the corners to free up space for his teammates.

That doesn’t mean he won’t pop a few past the opposing netminder when the opportunity arises.

Such was the case on Saturday night.

Nicholas fired a wrist shot high toward the Thief River Falls net just past the midway point of the second period.

The puck deflected off a stick in front and sailed past Norskies goaltender Caleb Sauers, his first goal of the Superior International Junior Hockey League season proving to be the game winner in a tightly fought 5-2 North Stars triumph.

“I’m not much for putting pucks in the net, so it’s always nice when I can squeak one out here and there,” said Nicholas, a graduate of the Thunder Bay Kings program who split the 2017-18 season between Selkirk of the Manitoba Junior Hockey League and Yorkton of the Saskatchewan Junior Hockey League before joining the Stars last fall.

Coach Rob DeGagne said he’s not setting his expectations too high on Nicholas, who had one assist in five games heading into Saturday’s contest at Fort William Gardens.

But he would like to see a little more firepower from the forward, in his final Junior A season.

“He’s not going to be a 30-goal-scorer, I don’t think so. But he’s going to be a guy that chips in here, chips in there, 15 or 20 goals. And he’s a role player. He’s great in the dressing room with everybody. He can get everybody fired up,” DeGagne said.

“He plays on the edge and as long as he doesn’t go over the edge, he’s an important and vital part of our team.”

So too, it appears, is rookie forward Dawson Lampi, another former Thunder Bay King who potted his first SIJHL goal in just his second game with the North Stars.

Two minutes later Lampi tied the score, giving him a goal and an assist in two games with the first-place Stars (5-1-0).

“We got it in there end and Tyska threw it out to me. I just kind of stopped it and let her go right away.”

Gavin Miller gave the Norskies a 2-1 lead at 7:54 of the first, but Jacob Brown evened things up with 1:24 to go in the period.

Thief River Falls forward J.J. Martin had two great chances to tie the game in the third, but hit the crossbar on his first attempt and rang one off the post with four minutes to go in regulation.

Norskies coach Wilson Housley pulled Sauers with 2:17 to go, to no avail. Cody Bruchowski lifted a puck into the empty net from just inside the redline at the 18:18 mark, and, with Sauers back on the bench for an extra attacker, Joel Willan added another insurance marker.

Next up for Thunder Bay is a date with the unbeaten Red Lake Miners on Friday at Fort William Gardens.

Star gazing: The game was delayed for several minutes when a pane of glass broke behind the North Stars net during warm-ups ... Thunder Bay's Maxime Fortin and Thief River Falls' Greg Paseschnikoff were tossed in the first for fighting.