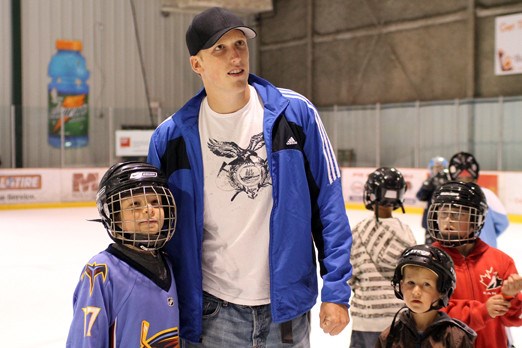 When Philadelphia’s Claude Giroux beat Henrik Lundqvist in an April 10 shootout – followed by an Olli Jokinen miss on Flyers goalie Brian Boucher – it crushed the New York Rangers hopes of an improbable, but certainly possible, late-season dash into the postseason.

Instead Staal and his teammates were forced to the sidelines, only to see those same Flyers defy the hockey odds and roll their way into the Stanley Cup final, where they came an overtime goal away from forcing a winner-takes-all Game 7.

It was a bitter pill to swallow said the 23-year-old Staal, a restricted free agent whose team won seven of its first eight games of 2009-10, only to lose five in a row in January and started to slide out of the playoff picture.

“I think that’s the first time that’s ever happened, losing a shootout to get out of the playoffs. It was hard. We got a push at the end, we won a lot of games, we just weren’t good enough in the middle of the season to seal it when we had to,” said Staal, who took time out of a busy summer on Thursday to take part in the annual Easter Seals skate at the Tournament Centre.

Staal, who set career highs with eight goals and 27 points, playing in all 82 games for the second consecutive season, said the Rangers essentially got what they deserved.

But one game is not to blame, he said.

“A shootout loss is a shootout loss, but we had ample time to win shootouts throughout the year where we could have got that point,” he said.

It didn’t make it any easier watching the Flyers march their way to the final for the first time in 13 years, in search of their first Stanley Cup since 1975.

“They played well against us, they got past the first round then they really started playing well and their confidence just kept growing and growing. That happens. Teams get confident and they start playing really well and they go on runs like that,” Staal said.

“It was obviously tough to watch.”

The Rangers defenceman, who is drawing interest from other teams and has GM Glen Sather threatening to draw a line in the sand during contract negotiations, knows it won’t get any easier in the NHL Eastern Conference, where teams like Philadelphia have gotten even tougher, with the addition of Jody Shelley and Sean O’Donnell, Ottawa has added Sergei Gonchar to its blue-line and New Jersey has added the likes of Anton Volchenkov and Henrik Tallinder to beef up its back end.

The heavy-spending Rangers haven’t stood still, adding bit parts like back-up goalie Martin Biron, but it’s nothing like last summer when they dropped high-scoring enigma Marian Gaborik into the mix. All Gaborik did was finish 10th in NHL scoring with 86 points, including equalling his career-best 42 goals.

Should he return to Broadway, the Rangers will need that type of effort and more to make it over the playoff hump for the third time in Staal’s brief professional career.

“The East is getting pretty thick, I think. Obviously we have a good defence, a good goalie. I think if we could just play more consistent than we did last year (we’ll be fine),” he said. “I think our effort wasn’t there most nights. If we can fix that,” we’ll be all right.”

In many ways 2009-10 was a breakout for the former first-rounder. The Thunder Bay native had his best offensive season and was invited to try out for the Canadian Olympic team. Though he was left off the roster, watching his older brother Eric bring home the gold, the second oldest of the four hockey-playing siblings thinks he took his game to the next level nonetheless.

“It felt like I improved again and I think I just want to keep doing that, as long as I can, and we’ll see where it takes us. Hopefully I can get to where I’m playing very well and the team is doing (well) and we can take a good run at that Cup.”