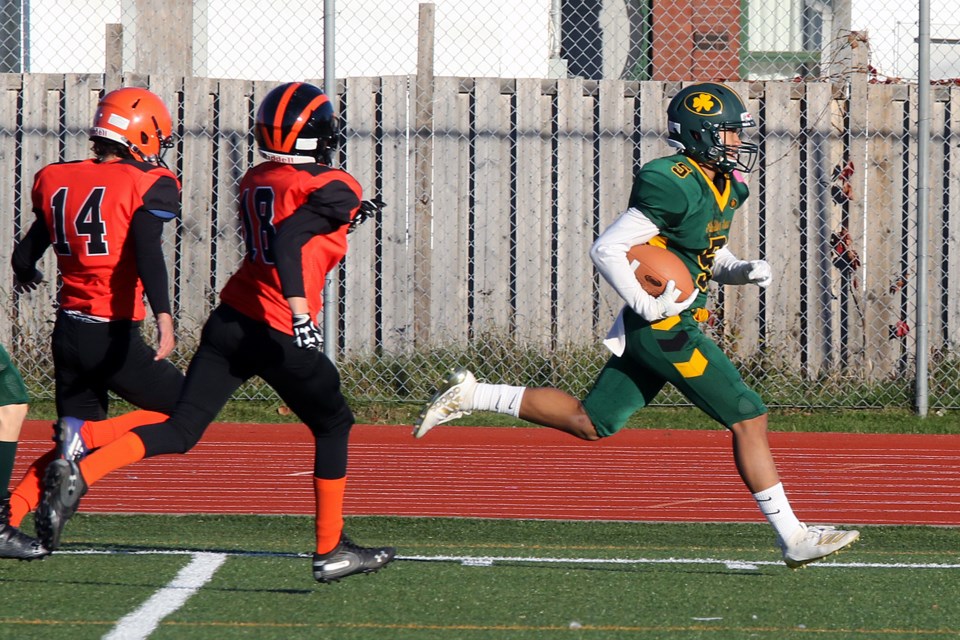 THUNDER BAY – The St. Patrick Saints big-play offence was on full display against the Westgate Tigers.

The junior Saints scored early and often on Thursday afternoon, downing the Tigers 43-0 at Fort William Stadium to keep their perfect season intact, while coach Dave Battistel had the chance to empty his bench and spread the offence around.

Star running back Manerplaw Winning set the tone early, with touchdown runs of nine and 27 yards in the opening half.

But it was Tyler Anderson and Devin Gibson who kept the juggernaut going.

Anderson dove across the goal line from two yards out in the second and Gibson dashed up the field 54 yards for the final major of the day, showing the depth of the St. Patrick roster.

“I think it was a really good game, a big team effort. It’s all about teamwork. It’s never the same game every time,” Gibson said.

It’s all building toward a second straight junior football championship.

There’s still plenty of work to do, Gibson said, but that’s what the regular season is for – tuning their game for the playoffs.

“I feel like we’re good, but we definitely have to work on more. It’s always a work in progress.”

The touchdown run made it look like he’d been playing football all of his life.

He burst through a hole and just kept accelerating, the Tigers defenders falling off the chase one by one until he’d found the end zone.

“I looked for the gap and I just ran,” he said.

Battistel said it’s great to see how much talent he’s got to play with, from one end of the roster to the other. Given the nature of the game, injuries can happen in an instant, and knowing there are guys who can step up at a moment’s notice is encouraging.

“We’re very fortunate. We have five very solid backs that we trust with the ball. Any one of those guys can hit the end zone. We’re kind of blessed that way and they all work hard and they all run hard,” Battistel said.

“A guy like Devin, he’s been working hard at practice and I’m glad he’s breaking through. For a guy who’s never played football for, he’s doing a good job.”

Kiran MacKenzie and Freedom Pawdomu had scoring runs inside the five-yard line to add to the Saints offence.

The Tigers best chance to score came on the game’s final play, but running back Matthew Willianen was hauled down deep in St. Patrick territory as the buzzer sounded.