A quarter of a century later, amateur curlers are still trying to recreate "The Shot." In the 10th end of the 1985 Brier in Moncton, facing a pair of Pat Ryan stones, one all-but-buried behind cover, Northern Ontario skip Al Hackner needed a miracle.
Mar 9, 2010 3:45 PM By: Leith Dunick 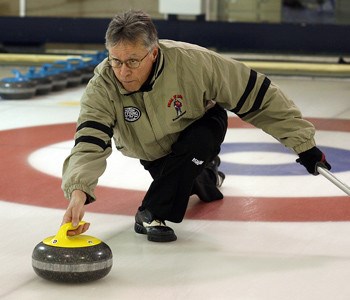 A quarter of a century later, amateur curlers are still trying to recreate "The Shot."

In the 10th end of the 1985 Brier in Moncton, facing a pair of Pat Ryan stones, one all-but-buried behind cover, Northern Ontario skip Al Hackner needed a miracle. Trailing 5-3 at the time, the Thunder Bay skip needed to hit the first stone thin, push it out of the rings, cascade into Ryan’s rock at the back of the house and stick his shooter.

The Iceman, as Hackner is known, calmly slid into the hack, eyed the one inch of Ryan’s buried rock that he could see and pushed off. With help from his sweepers he nicked the first, removed the second and the crowd at the Moncton Coliseum erupted.

Hackner then went on to steal a point in the extra end to snatch the title out of Ryan’s hands.

On Monday "The Shot" was named the greatest moment in Northern Ontario curling history by the Northern Ontario Curling Association, a list that also includes Heather Houston’s back-to-back Scott Tournament of Hearts wins in 1988 and 1989, Hackner’s first Brier win in 1982 and Houston’s 1989 world championship win.

"When we made the shot at the time, we thought it was just a curling shot. But over the years it’s stood the test of time and history and still regarded as maybe the greatest shot ever made in the Brier," Hackner said on Tuesday at the Fort William Curling Club.

"We’ve got to be pretty proud of that, but we also have to realize we were pretty fortunate to make it."

Moments earlier Ryan had seemingly buried his stone and raised his hands in the air, an early victory salute that proved a little premature.

Hackner said the shot was framed, and in his mind all he was thinking was to not hit the guard sitting in front of the rings.

"I can remember going down the ice thinking I’ve made a lot of these razzle-dazzle shots in club play before, but not in quite such meaningful games. I remember thinking just one more, one more right here. That was my thought," said Hackner, adding he didn’t feel pressure as he wiped his stone clean and readied to fire it down the pebbles.

"Pressure is when you have a very makeable shot and you feel the pressure that you have to make it. I really felt there was no pressure on me there, because I could have easily missed that shot and nobody would have said you choked. I just had to throw it clean," he said.

His third that day was Rick Lang, whose wife Lorraine was Houston’s lead, giving him ties to the first four moments on the list.

Lang, a five-time Brier champion, said he remembers The Shot like it happened yesterday.

"It was kind of a one-in-a-thousand and made under the condition that he had to make it or go home. He ended up winning the Brier and changing curling history because of it," Lang said. "It was so dramatic and the place went crazy after Al made the shot."

As impossible as the shot may have looked to anyone in the stands, Lang said they were confident he could make it.

"We actually had played that spot so many times, we said, well, we know exactly what the ice is, and it’s there. Just throw it good and try to make it."

While Hackner’s effort drew plenty of attention, not to be outdone later in the decade was Houston.

The foursome, which also included Diane Adams and Tracy Kennedy, recently relived their glory while watching Krista McCarville attempt to duplicate her efforts, but come up short with a third-place finish at January’s Scotties Tournament of Hearts in Sault Ste. Marie.

"We’re really proud of what we did and how much we could represent Northwestern Ontario," Houston said.

The list, which rounded out with the notorious gin Collins-laced early morning classes, came as a complete surprise to Houston.

"Nobody had any idea the list was coming. We were really excited and really pleased to still be in people’s memories."