So far, so good

The first 16 games are in the books, and for all intents and purposes, the Lakehead Thunderwolves have to be happy with the results.
Dec 15, 2010 2:36 PM By: Leith Dunick 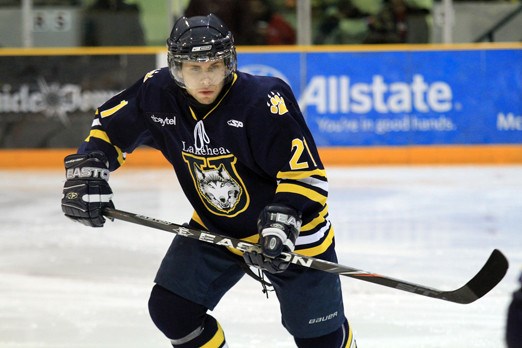 FILE -- Lakehead forward Adam Sergerie has become a point-a-game player for the Wolves in 2010-11. (Leith Dunick, tbnewswatch.com)
The first 16 games are in the books, and for all intents and purposes, the Lakehead Thunderwolves have to be happy with the results.

The Wolves battled their way back from a slow start, finishing with seven straight conference wins, enough to earn the seventh spot in the national rankings, and more importantly, snag second place in the competitive OUA West.

But as Christmas rapidly approaches, defenceman Kalvin Sagert said it’s no time to rest on their laurels. Sagert, who has a goal and an assist for the Wolves, said the team’s shaky beginning to the 2010-11 season is still fresh in their minds, and while the confidence is there with the winning streak – stretched to nine with a pair of meaningless wins over Regina – it has to be maintained going forward.

The team next takes to the ice on Dec. 29, the first of two non-conference contests against the University of Manitoba Bisons, here for the second straight year at Christmastime.

“I think everyone is going to take their time off, refresh, get away from school and get away from hockey for a bit,” Sagert said. “Obviously those games against Manitoba aren’t going to be easy ones. They’re one of the top teams in the country and they’ve been there the last couple of years.

“They’ll be a good test for us and a good tune-up to kind of see where we’re at right after Christmas and get ready for our season.”

Looking back, Sagert isn’t sure the team has filled in all the holes created by the departure of stars forwards Scott Dobben, Dan Speer and Matt Dias, but the signs are there that guys are there ready to step into those roles.

Adam Sergerie has morphed into a point-a-game player, Kris Hogg is finally starting to show his full potential, and then there are the unsung heroes, Sagert said.

“Just off the top of my head, a guy like Brennan Menard is doing it. He was battling to get in the lineup last year and he’s now really picking up a lot of points, producing a lot and playing well those last nine games. It really does a lot for his confidence. There are at least a handful of other guys who have stepped into holes and they’ve made things a lot easier for the transition this year,” Sagert said.

Forward Brock McPherson said the Wolves were their own worst enemy at the start of the season, which saw the team go 4-4-1 through nine games.

The lineup will get a boost with the addition of Sudbury’s Jadran Beljo, a two-time 30-goal scorer in the Ontario Hockey League who had to sit out the first half of the season because of a short stint in the ECHL last year.

McPherson remembers what the addition of Dias, Matt Caria and Ryan McDonald for the second half last year, and has no problem with Beljo’s emergence in 2011.

“I think you’re always trying to make your team better. Beljo’s been here all year. He knows all the guys. He’s great around the room and I think we’re really looking forward to getting him in the lineup,” McPherson said.

They key will be getting off to a good start. The Wolves host Windsor on Jan. 7 and 8 to open the second half, then travel to Western the following weekend for their only two meetings with the top-ranked Mustangs.

“We’ve got to continue on a high note, remember the things we did correctly and don’t lose that focus over the break,” he said.