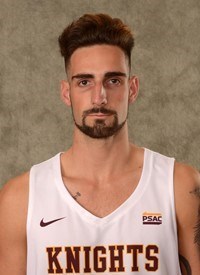 Eric Gonzalez, who spent the past couple of seasons playing for Spain inthe 2017 FIBA U18 European Division A Championship, and later for Gannon University, is a 6-foot-8 wing who coach Ryan Thomson says will fit nicely into the LU lineup.

"Eric gives us a great deal of versatility and size up front,” said head coach Ryan Thomson. “He shoots the ball at a high level, brings some toughness for us as well as an understanding of what it takes to win and compete at a high level."

Gonzalez plans to take engineering in Thunder Bay and is looking forward to settling in to his new home.

Lakehead is a great program to keep growing as a player to reach my ultimate goals. I'm also able to pursue a degree that I'm keenly interested in.”

Johnston rink captures Major League of Curling crown
Jan 26, 2020 2:06 AM
Comments
We welcome your feedback and encourage you to share your thoughts on this story. We ask that you be respectful of others and their points of view, refrain from personal attacks and stay on topic. To learn about our commenting policies and how we moderate, please read our Community Guidelines.