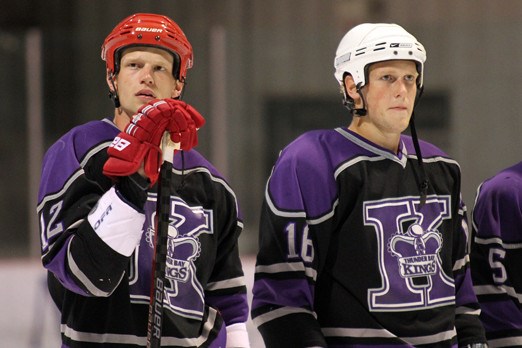 Eric Staal (left) and youngest brother Jared joined forces in Tuesday`s Thunder Bay Kings alumni showcase, and will try to do the same this fall with the Carolina Hurricanes. (By Leith Dunick, tbnewswatch.com)
Last March, Eric Staal brought a gold medal back to Raleigh, N.C.

In September the Carolina Hurricanes captain is bringing something a little nearer and dearer to his heart – his little brother Jared – acquired on May 13 from the Phoenix Coyotes for a fifth-round draft pick.

Jared, the youngest of the four hockey-playing Staal siblings, has arguably the toughest road to the show. A second-round pick of the Coyotes in 2008 – making him the only Staal not taken in the first round – the soon-to-be 20-year-old views the change in scenery as a good move as he tries to prove his critics wrong and join his brothers in the NHL.

“I just think it’s probably a better situation for me than it was in Phoenix,” Jared Staal said Tuesday after joining older brothers Eric and Marc at the annual Thunder Bay Kings Alumni Showcase at the Tournament Centre.

“I know (Phoenix) had a lot of players. I’m going to an organization I’m already familiar with. My brother has already gone through a lot of things that I’ll have to go through. It obviously makes things a lot more comfortable for me. I’m excited. I was there last week and I have nothing but good things to say about all the personnel there.”

A four-year veteran of the OHL’s Sudbury Wolves, Jared never really distinguished himself at the major junior level, at least not the way his brothers did, regressing to 12 goals in 59 games this past season after successive seasons of 21 and 19.

But Mike Foligno, who coached him in Sudbury, said Jared has matured as a player and handled the limelight that accompanies being part of a hockey dynasty.

"He's intelligent, understands the game well and positionally is very good. He has the stature and smarts to one day play on the NHL level. He does need to improve his overall quickness, find that extra step, and he needs more man muscle,” Foligno told Rogers Sportsnet.

Jared Staal isn’t ruling out the idea that that day could come as early as this fall, though in all likelihood he’ll serve an apprenticeship with the Charlotte Checkers, the Hurricanes relocated American Hockey League farm team.

He admitted the pressure is there, but it’s not just coming from outside sources.

“I put pressure on myself, trying to make the jump as fast as possible. But at the same time I know there are a lot of good hockey minds in Carolina who will do what’s right for me. That doesn’t mean I’m going to slack off. I’m going to put my best foot forward and make them make a hard decision on me and hopefully I can stay there as long as possible,” he said.

It’s that attitude that convinced older brother Eric to recommend the Hurricanes make a deal for Jared, as GM Jim Rutherford began retooling a team that missed the playoffs for the third time in four seasons, a year after reaching the Eastern Conference final.

“They asked me about him at the end of the season, just about him as a person and as a player. I just gave him my honest opinion about him, what I thought. I obviously haven’t seen him play a lot the last bunch of years, being in the NHL and playing at different times. They wanted to pursue it and for him it’s just a great opportunity,” Eric said.

“We’re transitioning to a younger team and everybody’s going to get an opportunity. That’s all he’s been looking for and it’s going to be fun having him at camp.”

But while family ties run deep, both brothers say they’ll minimize them when training camp starts. Eric said he’s more than happy to answer any questions Jared might have and nudge him gently along the way to the pros.

“For the most part you’ve got to figure it out on your own and he’s done a great job of that all the way through, especially this summer at the conditioning camp they had.”

The questions will come, said Jared, but agreeing with Eric, said he wants to make it on his own, not because his brother’s the captain and undisputed star of the team.

For once they’ll be fighting on the same side.