Alston Harris comes off the bench to score 23 to propel Lakehead to its seventh straight OUA men's basketball win.
0
Jan 26, 2020 10:05 AM By: Leith Dunick 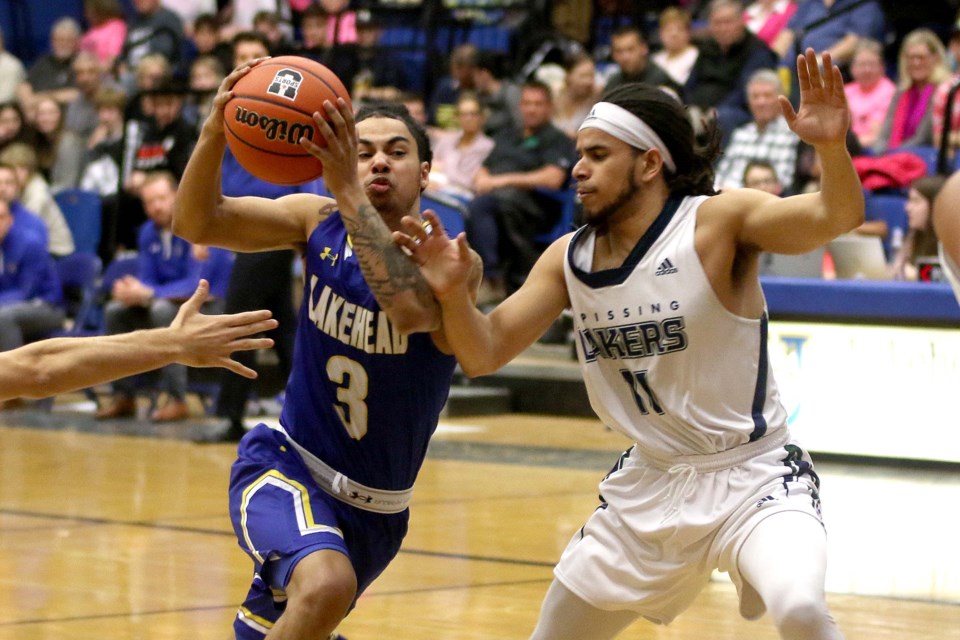 THUNDER BAY – The Nipissing Lakers are not a team to take for granted.

Not with stars like Justin Shaver clogging up the key and Quinton Ashitei keeping opponents honest on the perimeter.

But, even with the pair putting up 28 and 29 points respectively on Saturday night, it wasn't enough to pull off an OUA men's basketball upset over the No. 6-ranked Lakehead Thunderwolves at the C.J. Sanders Fieldhouse.

The Wolves overcame a sluggish start with a 24-6 run in the second quarter, withstood a second Lakers charge in the third and pulled away in the fourth to capture a 95-79 triumph, their seventh straight victory.

Second-year guard Alston Harris was the driving force for the Thunderwolves, coming off the bench to score a team-high 23 points.

But it was his defence the proved to be the spark in the second quarter, Lakehead trying to put a 27-21 first-quarter deficit behind them.

On back-to-back Nipissing possessions Harris' quick hands produced a steal. On both occasions he raced down the court unimpeded to the hoop, the easy lay-ins helping the Thunderwolves pull further away, the second extending their lead to 14 points at the time.

“We had a slow start and after that we just started picking up on defence and then our defence translated into easy offence,” said Harris, who hit the 20-point mark for just the second time this season.

Lakehead coach Ryan Thomson said Harris was active all night long off the ball defensively, creating havoc for a Nipissing team that struggled to find consistency after jumping out to an early 14-4 lead over a Thunderwolves team still basking in Friday night's 73-59 win over No. 7 Laurentian.

“He had a bunch of deflections and a couple of steals that led to transition buckets for us. And when he's finishing well around the rim – he was nine of 15, which is good for a guy his size, because most of his shots were in the paint at this point – which was a pretty impressive point for him,” Thomson said.

The Wolves led by 15 at the half and by as many as 17 in the third, but the Lakers kept battling back, Shaver and Ashitei closing the gap to as little as three late in the period, Nippising trailing by a 61-58 count.

But Lock Lam, who finished with 16 points and six blocked shots, to go with nine rebounds, hit a double-clutch three-pointer to close out the quarter.

A 10-0 run in the fourth stretched the lead to 88-72, cuirtailing any chance of a Nipissing comeback.

Laoui Msambya had another strong night for the Thunderwolves, finishing with 19 points and three steals, while leading scorer Isaiah Traylor, who picked up two quick fouls in the first half, put up 16 points and hauled in eight boards.

Lakehead hits the road next weekend for a pair against the Toronto Varsity Blues.