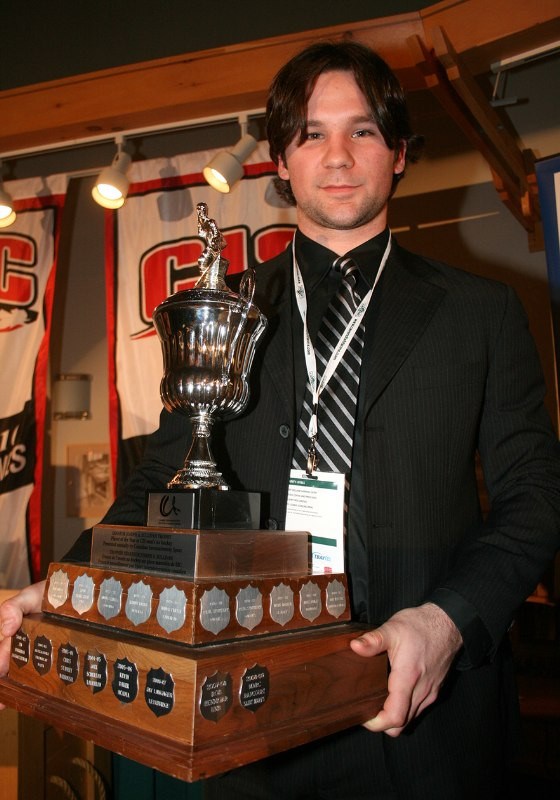 UNB's Hunter Tremblay was named the nation's most valuable player. (Leith Dunick)
Hunter Tremblay earned a trophy in Thunder Bay, just not the one he’d hoped to win this season.

The University of New Brunswick forward would much rather be playing for a national university hockey championship this weekend, but instead had to settle for the Joseph A. Sullivan Trophy, an honour given to Canadian Interuniversity Sport’s most valuable player.

Tremblay, 24, on Wednesday called it a bittersweet triumph.

“I think coach said it best,” the Timmins, Ont. native said. “It’s a regular season award. Obviously our season didn’t go as planned. But ... I know how hard I worked all year and it’s nice to be recognized for it.”

It was the second time in three years a UNB player won the prestigious trophy; Rob Hennigar, who has since turned pro, captured it in 2008. Saint Mary’s Marc Rancourt won it last year.  Tremblay was nominated alongside Alberta’s Chad Klassen and McGill sniper Francis Verreault-Paul.

Tremblay was quick to praise his teammates, without whom the award wouldn’t have been possible he said, centring out linemates John Scott Dickson and rookie Chris Culligan, who he helped initiate into the UNB way.

“Since the day I got to UNB I’ve had tremendous teammates,” said Tremblay, a one-time teammate of Lakehead’s Dan Speer with the Ontario Hockey League’s Barrie Colts. “I can’t say enough about them.”

Tremblay tied for the CIS lead with 25 goals, and topped all players with 57 points, the third time in three seasons with the Varsity Reds that he’s topped the 50-point mark. UNB went 27-1 during the regular season and were heavy favourites to repeat as Canadian champions, only to run into a trap-heavy St. Francis Xavier squad, who upset the Varsity Reds in three straight in the Atlantic University Sport semifinal.

The bitterness of the loss, combined with the fact the Fredericton, N.B.-based school is hosting the University Cup in 2011 and 2012 and his desire to complete his education means the heavily scouted Tremblay will likely be back in a UNB uniform come the fall.

“My goal coming out of junior was to get my degree and keep up my hockey and keep improving. And I’ve been able to do that. Hopefully I’ll finish up my degree and go play pro somewhere.”

MacDougall, whose team topped the national rankings for 15 weeks, joked he did Sirant a favour, as the past few winners did not fare well at the University Cup.

“From a team perspective, we had a really, really excellent year. We had a great group of guys, but unfortunately the last six days wasn’t what we set out to do. That being said, that’s hockey.”

McGill’s March-Andre Dorion captured defenceman of the year honours, while Manitoba’s Steve Christie earned the goaltender of the year award. Both trophies were in their inaugural year. Prince Edward Island’s Jared Gomes was named the CIS rookie of the year, after notching 33 points to pace the Panthers to a fourth place finish in the AUS.

UQTR's Francis Guerette-Charland took the R.W. Pugh Award as the nation’s most sportsmanlike player, while Alberta’s Tyler Metcalfe was given the Randy Gregg Award as the most outstanding student athlete.

Lakehead players were shut out at the banquet.