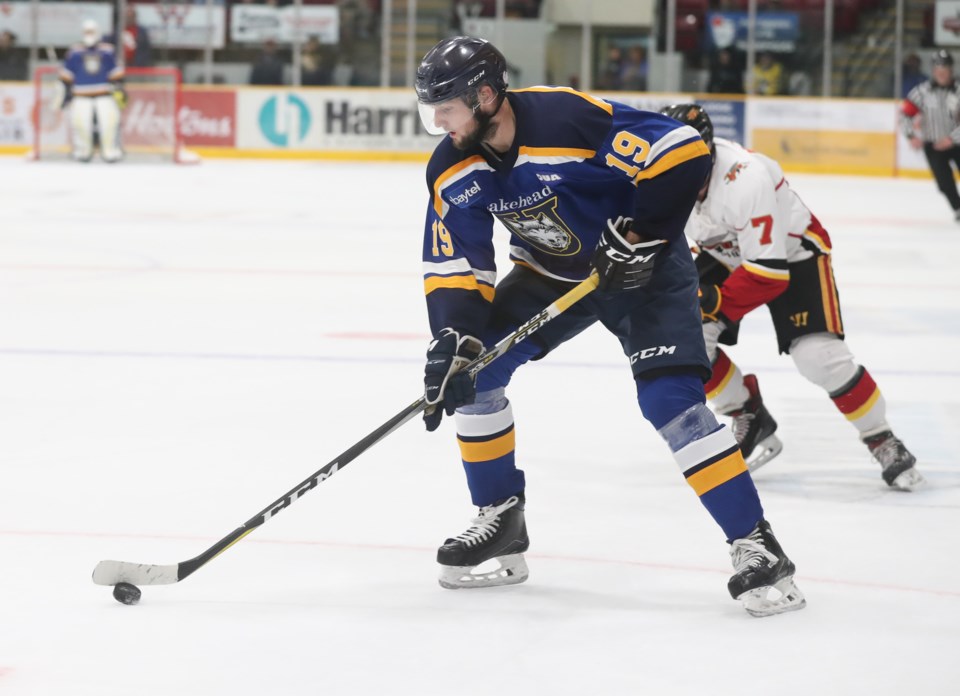 Lakehead's Tomas Soustal had an assist on the Thunderwolves lone goal in a 4-1 loss to Guelph on Friday, Sept. 27, 2019. (James Mirabelli)

LONDON, Ont. -- The Lakehead Thunderwolves saved their best for last.

Dexter Kuczek sent the game to overtime with a goal in the final minute of overtime and Tomas Soustal won it in the extra frame as the Wolves snapped an untimely three-game losing streak with a much needed 3-2 over the host Western Mustangs.

Nic Renyard bounced back nicely in the LU net, a night after giving up eight goals to the Windsor Lancers, allowing just two goals on 36 shots.

Daniel McKitrick had the Thunderwolves other goal, opening the scoring at the 11:57 mark of the first.

Kenny Huether and Austin Osmanski had the tallies for the Mustangs.

Luke Peresinni was good on 37 of 40 Lakehead shots.

Lakehead hosts Brock on Friday and Saturday night on the penultimate weekend of the regular season.

Thunder Bay's Kelsey Tikka to be inducted into Golden Hawk hall of fame
Sep 20, 2020 2:26 PM
Comments
We welcome your feedback and encourage you to share your thoughts. We ask that you be respectful of others and their points of view, refrain from personal attacks and stay on topic. To learn about our commenting policies and how we moderate, please read our Community Guidelines.