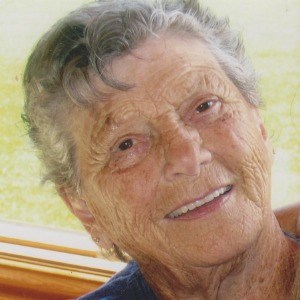 Mrs. Edna Loiselle, formerly of Slate River and Oliver Lake, passed away peacefully at Hogarth Manor on the morning of Tuesday, May 14, 2019 at the age of 96.

Edna was born on September 15, 1922 in Strome, Alberta. She was the fourth child of six for Daisy and Edward Baker. As a young child her family moved to South Neebing and despite their many hardships, they emerged with a ‘make the most out of life’ attitude towards just about everything. From there the family moved into “the big house” in Vickers Heights.

There were many fond memories for the Baker kids growing up on Daisy Lane. It was there that Edna met Bill and it was love at first sight. They were married in 1941. Bill Jr. was born just as Bill Sr. went off to war in 1942. While Bill served overseas, Edna worked at Canada Car. Edna loved to tell the story of their reunion after the war. She was at work when she got word that the war was over. She grabbed her lunch kit and ran all the way home to Daisy Lane. After four years at war, Bill was finally coming home. Upon his return, they lived in Vickers Heights and in 1952 were able to buy their own Dairy Farm in Slate River. Their six kids, Bill Jr., Michael, David, Nancy, Larry and Donna grew up playing in the muck and jumping from one cow pie to the next. Living on the farm instilled a love for adventure and the outdoors in all their children.

The Loiselle Family Farm was sold after 25 years; Edna and Bill moved into their new home on Candy Mountain. Edna started a career designing and making the costumes at Old Fort William. This kept her busy for more than 15 years but she still found time to keep everyone supplied with her hand-made treasures.

Living on top of Candy Mountain, Bill and Edna enjoyed time with friends, dancing, skiing and numerous other outdoor and social activities. In retirement, they travelled to Florida each winter and spent their summers at Oliver Lake.

Edna loved life, especially with Bill. She enjoyed gardening, quilting, living at Oliver Lake and spending time with family. She also enjoyed the 60 years spent as a member of the Slate River Women’s Institute.

Bill Sr. died in 1997. Two years later, her son, Michael passed away. Although it was a very difficult time, Edna continued to make the most out of life. She still travelled to Florida and spent summers at the Lake. When the time came, Edna moved to town. She spent those years with friends and family still enjoying outings and always up to trying new things. Her time with family was cherished.

So much life to remember. Please join us for a celebration of Edna’s life on Friday, May 17, 2019 from 12:00 pm until 2:00 pm in the reception hall of Harbourview Funeral Centre.

If friends so desire, donations may be made in Edna’s memory to a charity of your choice.