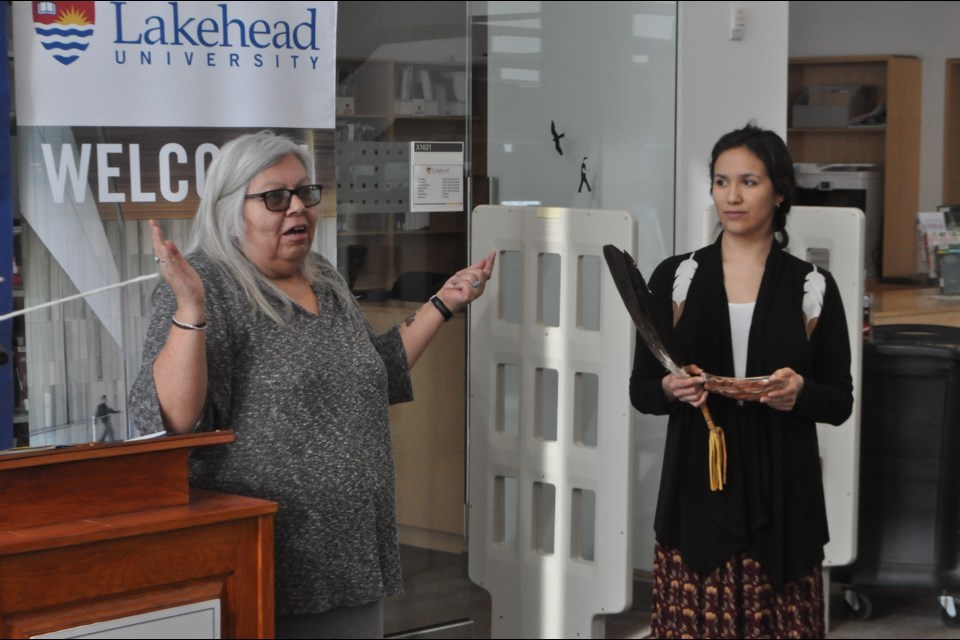 Trish Monague is an elder who thunders through your veins. An elder at the age of 56, Monague offers cultural healing and counselling to her communities and as the elder on residence at Lakehead University – Orillia and Thunder Bay, she uses her past experiences and knowledge to lead her wisdom and teachings.

The beginning of darkness

The past holds moments for Monague that shake a person’s core. As a woman who experienced the 1960s scoop, her journey began in 1967 when she was removed from her home at 18 months old.

She has vivid memories of being in foster care after she and her five siblings were taken from their parents and family. Shortly after being foster Monague and her siblings were adopted by a family who was anything but kind.

“I remember being very afraid and I remember being a baby and being worried they would take someone else away from me [and] I believed that the first 16 years of my life living with my adopted parents that they were trying to kill me. They would say things like, ‘we’re going to beat the Indian out of you.’ They were very violent beyond words.”

Monague remembers thinking if these people were trying to kill her, why would they adopt six brown children.

“They couldn’t beat the Indian out of us. They tried and they didn’t. We weren’t going to assimilate.”

One-by-one her siblings were kicked out of the house and, as the youngest, Monague found herself on the streets at 15.

Monague is honest about her past after she began healing as an adult and uses her past to help guide members of her community.

“At 26 I stopped asking for death to come and at 35 years old a grandmother told me, ‘Creator gifted you with this light to shine bright’ [and] I have light brighter than the sun.”

Through her healing, Monague began to understand this trauma didn’t define her. After a long period of being suicidal and praying for death to come, she understood that there’s something greater than herself.

“I have to be able to detach myself when I talk about these experiences because it’s PTSD and trauma and it’s part of my work, it’s what I do. It’s that cultural healing and counseling I offer my communities.”

When Monague was acknowledged as an elder, she felt as though she couldn’t fulfill the demands and it required perfection without mistakes. She soon realized the importance of trusting yourself.

“The most important thing in life is to put your faith and belief in something bigger and greater than yourself, pick up your drawers and keep looking and moving ahead.”

Monague picked up her bundle and, no matter the adversity that came in her way in these 56 years, now lives in a world of teachings through spirit and creator.

This story was made possible by our Community Leaders Program partner.