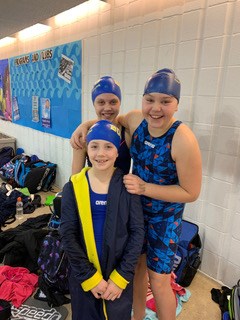 This past weekend, 45 swimmers from the Thunder Bay Thunderbolts Swim Club competed at the second annual Exterior Finishing Long Course Invitational at the Lakehead University Pool.

The event gave the athletes another chance to prove that their hard work and dedication at every practice is paying off. This was only the second long course event of the season for many of the athletes and it gave them a chance to push themselves and have some fun with their teammates. Many swimmers had numerous personal best times and some swam their way to provincial qualifying times. Hanna Abbink, a silver medal winner, said “I was so excited to see that I took so much time off of all of my events. I feel motivated to get back to practice and work hard.”

Senior Coach Andy Ritchie was pleased to see some exceptional swimming with many athletes meeting the goals they had set for themselves when the season started in September.

Coach Tracy Kosinski was thrilled that many of her swimmers swam their first 400 IM. “I was so impressed with all our swimmers for taking on new physical challenges with confidence.”

The Thunder Bolts are back in the pool training for a number of out of town and local events, including some athletes who will be competing against the best in the country at the Olympic Trials one month from now.

Cycling journey continues despite broken arm
Jul 3, 2020 10:42 AM
Comments
We welcome your feedback and encourage you to share your thoughts. We ask that you be respectful of others and their points of view, refrain from personal attacks and stay on topic. To learn about our commenting policies and how we moderate, please read our Community Guidelines.