A lack of access to and the delivery of public services to the province’s Aboriginal people is a growing concern for many local organizations.
0
Apr 4, 2012 4:57 PM By: Jodi Lundmark 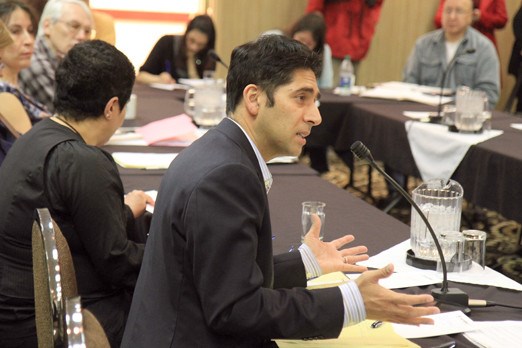 A lack of access to and the delivery of public services to the province’s Aboriginal people is a growing concern for many local organizations.

“The province seems to be moving towards an automated approach to service delivery and that effectively eliminates the greater majority of Aboriginal people simply because a lot of Aboriginal people don’t have access to phone, Internet connection or a computer,” said Deanna Therriault, housing policy analyst for the Ontario Native Women’s Association.

ONWA was just one of several organizations that had representatives attend an Ontario Human Rights Review meeting at the Victoria Inn Wednesday.

More than 30 people attended the meeting to express their concerns and ideas about human rights issues.

Therriault said the majority of people discussing Aboriginal issues at the meeting commented on the need for an Aboriginal-specific policy. She wants to see the initiation of a human rights strategic framework for Aboriginal people.

“There needs to be some relationship development between the province and the Aboriginal community,” she said.

“There are aspects of the (human rights) code that are not inclusive of Aboriginal people, specifically the delivery and access of support.”

Ontario Human Rights Review chairman Andrew Pinto has been travelling the province meeting with various community groups and the general public to find out what the major human rights issues facing Ontarians are.

He said Thunder Bay has many regional issues, but what he heard Wednesday was that many Aboriginal communities face challenges of accessing the system.

He also heard the formal legal system is daunting to many marginalized people.

“They really feel intimidated by filling out complex forms or putting their experience into a formal legal setting,” Pinto said.

That causes people to not proceed with their complaint, causing them to live with discrimination or harassment.

“I’m looking for creative ways to bridge that gap and at the same time accept that we can’t change the human rights legal system overnight,” he said.

Once the public consultations are complete, Pinto will sort through that information along with issues raised in various stakeholder meetings and more than 50 written submissions he has received and then write a report of recommendations to be given to the provincial government.