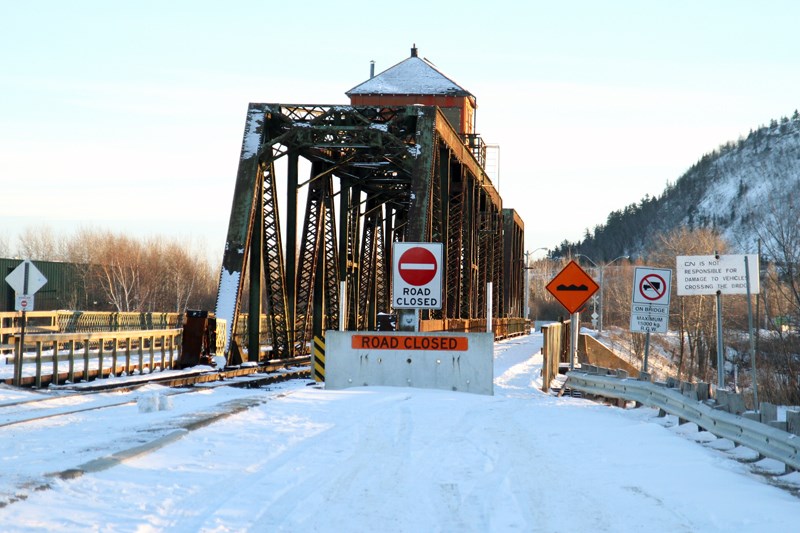 The James Street Swing Bridge, owned by CN Rail, has been closed to vehicular traffic since a fire broke out on the northern approach spans on the night of Oct. 29, 2013. (tbnewswatch file photograph)

Closed to vehicular traffic for more than four years, the Canadian National Railway-owned bridge which connects Thunder Bay to Fort William First Nation across the Kaministiquia River has been the subject of legal wrangling with the city fighting to force the railway to reopen the span.

“What do you think you’re going to win?” Collins asked Thunder Bay city councillors at a special joint council meeting between the two communities on Wednesday evening. “A 112-year-old bridge that has outlived its lifecycle. You talk to anybody with bridge experience they tell you the life cycle of a bridge is 100 years.”

The future of the bridge, which CN closed to traffic following an Oct. 29, 2013 blaze that broke out on the northern approach spans, is now before the Ontario Court of Appeal after the city presented its case last month. The city chose to continue pursuing its argument in courtrooms after Ontario Superior Court Justice Patrick Smith dismissed its initial attempt to force CN to reopen the bridge.

City solicitor Patty Robinet said the three-judge panel is expected to deliver its decision in two to six months.

“At this point, we wait for a decision,” Robinet said. “There’s nothing that we can do as a municipality to push that decision to come out any sooner.”

Collins expects the legal battle would be far from over even if the city is successful, speculating CN would bring the case to the Supreme Court if the railway is ruled to reopen the bridge to vehicular traffic.

“I dearly would love to find a solution to get this out of the courts,” Collins said.  “I’m not sure who’s going to win at the end of the day. For a fact, it’s not going to be Fort William.”

Collins said Fort William First Nation leadership have met with federal and provincial government representatives to discuss a new bridge, which would be located just west of the swing bridge with preliminary cost estimates of $25 million. The process would likely take between two to five years, he added.

But the chief said the court battle is blocking any potential momentum to move forward.

“Both levels of government will not inject themselves in a litigation process,” Collins said.

This summer, the Ministry of Transportation is planning nighttime detours, closing the highway between Broadway Avenue and the Thunder Bay International Airport, to repair a number of structures along the roadway.

Collins, who has previously said he is opposed to that plan, told council he has explored having temporary Bailey bridges installed on the cantilevers of the existing bridge, though he acknowledged it’s “not a cheap short-term solution” with a likely initial price tag of more than $1 million.

“I don’t think CN would object to it,” Collins said in an interview after the meeting. “We’ve been working with CN a little bit behind the scenes, trying to come up with different ideas and different solutions. We continue to work and try to find the ultimate answer…Hopefully it’s a new bridge.”