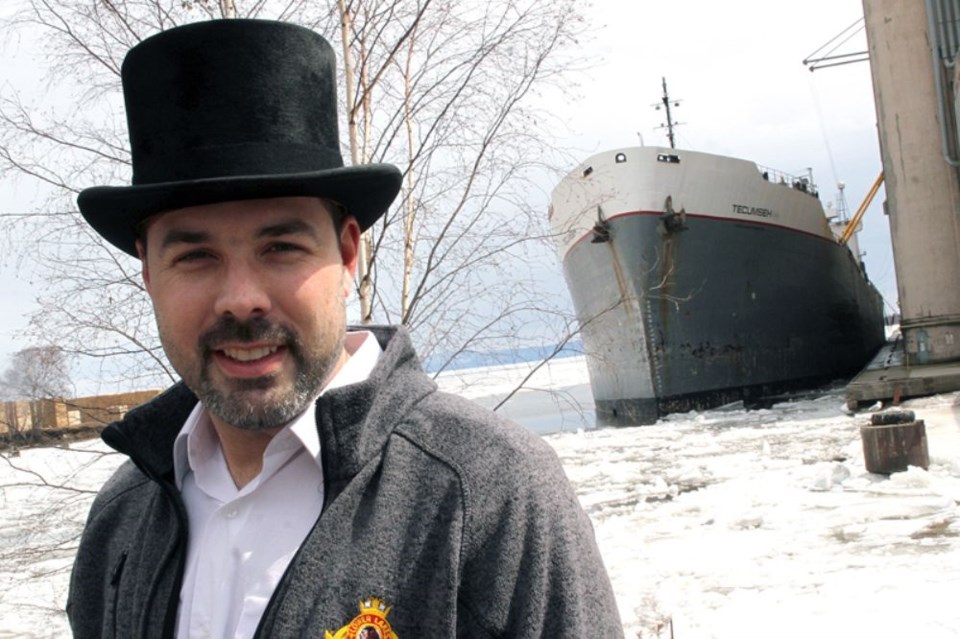 Capt. Vaughan Kendall of the MV Tecumseh displays the ceremonial top hat on Friday after his ship was the first in port for the coming shipping season. (Leith Dunick, tbnewswatch.com)

THUNDER BAY -- Capt. Vaughan Kendall says getting to Thunder Bay had its share of harrowing moments.

With thick ice still coating much of Lake Superior, Vaughan, who pilots the MV Tecumseh, on Friday said it was slow going after sailing through the Sault locks.

But it wasn't as bad as last year, the Port Dover, Ont.-based captain said.

"Conditions were really good from Windsor up to Sault Ste. Marie," he said on Friday, hours after the Tecumseh became the first laker to arrive in port this shipping season.

However Vaughan, who on Friday was awarded the honorary top hat at a ceremony at Mission Terminal for being the first ship to dock in Thunder Bay, said they weren't out of danger yet.

"We were only four miles from the pier last night and the ship came to a stop. We got stuck," Vaughan said.

"But the U.S. Coast Guard, their ice cutter came this morning and made a nice track for us, so we were able to get into the dock."

The ship is expected to load up to 20,000 tonnes of grain -- canola and soy, before departing for southern Ontario.

Thunder Bay Port Authority president Tim Heney said the Tecumseh is the first of a wave of about 20 ships, including the first sea-going vessel, expected to arrive in the city wihin the next week or so.

That's a good sign, Heney said, adding that despite the fact the ship is arriving about three weeks later than the traditional average, it's two weeks ahead of last year's first arrival.

"There's still tough ice conditions in Whitefish Bay this year, but there's good co-operation between the Canadian and American coast guards. That was the toughest. But now it's open and we'll have 20 ships by next week," Heney said.

"The elevators are pretty much full and they were kind of planning on an earlier start than this, so there's been some anxious people waiting to start loading the ship. We'll be ahead of last year, certainly on tonnage very early in because the elevators are full and the number of ships we're going to have."