In the wake of an OIPRD report that substantiated allegations of police misconduct in the investigation of Stacy DeBungee’s death, First Nation leaders want to see an overhaul in the city’s policing service.
0
Mar 5, 2018 1:42 PM By: Doug Diaczuk 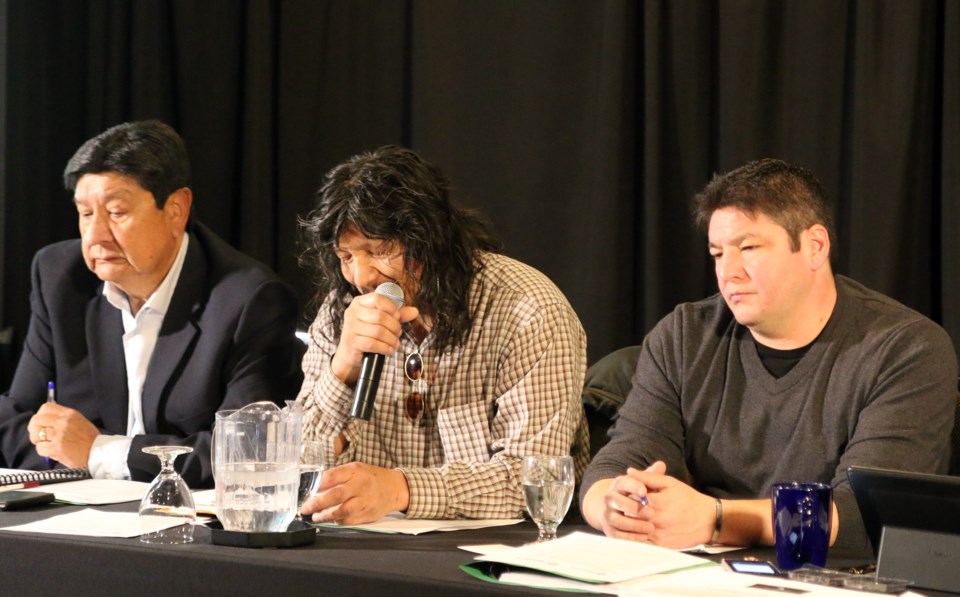 Brad DeBungee (centre), along with Rainy River First Nation chief, Robin McGinnis (right) and past chief, Jim Leonard, speaks about how he feels validated following the release of a report the OIPRD that substantiated allegations of misconduct by Thunder Bay Police’s investigation into the death of his brother, Stacy.

“If he refuses to resign, I am calling for the (Police Services Board) to fire him,” said Rainy River First Nation chief, Rob McGinnis during a media conference in Thunder Bay on Monday. “He is the one that is in control of the police force, or he isn’t in control and is incompetent, or he refuses to change. Either way he needs to go.”

The media conference, which included First Nations leaders and family of Stacy DeBungee, was called in the wake of a conduct report released by the Office of the Independent Police Review Director (OIPRD) that substantiated allegations of misconduct by Thunder Bay Police’s investigation into the death of 41-year-old DeBungee of Rainy River First Nation, who was found dead in the McIntyre River in October, 2015.

The 126-page report, released Monday morning to the public, found the Criminal Investigation Branch of the Thunder Bay Police Service and lead investigators, prematurely ruled the death of DeBungee to be non-criminal.

Several factors were cited in the report, including failure on the part of investigators to secure or hold the scene until an autopsy had been conducted, a lack of forensic evidence examination, failure to take statements from individual or witnesses who were with DeBungee before his death, and statements made in media releases that the death was non-criminal hours after DeBungee’s body was found.

The report states there is overwhelming evidence to support that Thunder Bay Police investigators, Det. Shawn Harrison and Det. Const. Shawn Whipple, concluded Stacy DeBungee “rolled into the river and drowned without any external intervention.”

Brad DeBungee, brother of Stacy, said the release of the report validated what he has suspected all along regarding how his brother’s death was handled by police.

“I found a little comfort when I read the report,” he said. “It kind of put me at ease to find my theory was legitimate. It hurts. To see the treatment of the family, we got no closure.”

Following the media conference, DeBungee said he felt validated further because the officers in charge of the investigation are being held accountable and that this could lead to a proper investigation into the death of his brother.

“We knew things were bad, but we didn’t think they were this bad,” added former Rainy River First Nation chief, Jim Leonard. “Every page of those 126 pages it states there is deficiency after deficiency.”

Nishnawbe Aski Nation Grand Chief, Alvin Fiddler, said the Thunder Bay Police Service is already facing other investigations, including a systemic review by the OIPRD looking at racism in the police service, which Fiddler said will be even more damning.

“If I was chief Levesque, I would seriously think about planning my strategy to leave the police service,” Fiddler said. “It’s very clear that he has failed again with this case and this family and this community. This is not just the one case. There has been a disturbing pattern we have seen in the city. I think the resignation of the police chief would be a start, but only a start.”

“We are calling on the Police Services Board to completely overhaul how policing is delivered in the city,” Fiddler continued. “It has to be seen that it serves everyone in this community, including our young people who come out to high school in Thunder Bay.”

McGinnis agreed, adding that systemic changes are needed in the police service, but nothing will change until the leadership is changed.

“You have to change leadership and get somebody in there that is willing to help change it,” he said. “Chief Levesque’s leaving is just the first step. I’m under no false pretenses that once he is gone everything is going to be rainbows and unicorns. It’s just the first step.”

For Brad DeBungee, the report and calls for change in how policing is done in the city is not just about finding closure for him and Stacy’s family, but the other families who have been through similar experiences.

“I feel very blessed and thankful for having my Chief and council there for me when I needed the help to pursue this matter and I feel for those other people who don’t have the opportunity or the help that they need to get them to know what happened to their family members,” he said. “All they want is closure.”