Police ask for patience as investigation into school threats continues 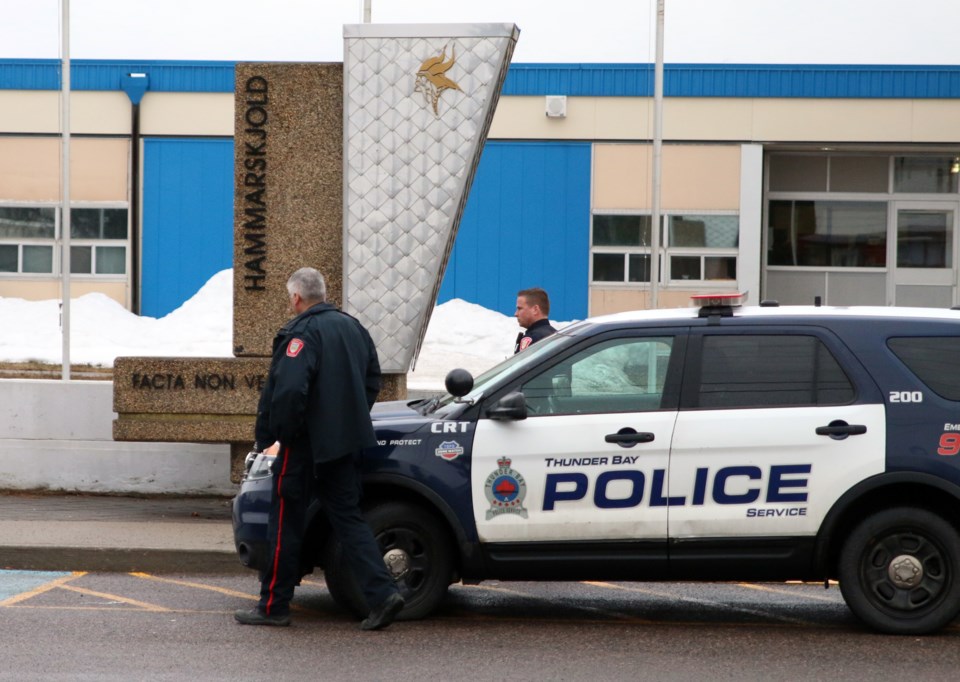 Police were once again at Hammarskjold High School Monday morning after receiving an anonymous threat directed at the school. (Photo by Doug Diaczuk - Tbnewswatch.com).

THUNDER BAY - Following an anonymous threat that resulted in the closure of Hammarskjold High School for a fourth time in less than a week, investigators with the Thunder Bay Police Service say they understand the public’s frustration, but are asking for patience as the investigation continues.

“Please be patient. We truly are investigating it and we are doing our best with everything that comes in,” said Det. Sgt. Tracey Lewis. “We are following up on it, we have delegated resources to this, we take it very seriously. Please be patient and trust we are doing every step to resolve this.”

An anonymous threat against the north side high school was received by police Monday morning and the Lakehead Public School Board decided to close the school due to safety concerns for students and staff.

There have been nine threats made against the school this academic year, with School Board opting to close the school seven times.

Last week, Police said the threats have involved planned shootings and explosives inside the school. The nature of the threats on Monday was not released.

According to Lakehead Public School Board spokesperson, Bruce Nugent, the decision to close the school is made based on the information contained in each threat.

Nugent added the School Board is not considering extending the school year to make up for the days lost.

“We are in talks with other school boards to see what they would do in a situation like this,” he said. “There are a lot of boards throughout the province who lose a lot more days than we do in terms of inclement weather and there is no talk of extending the school year in those jurisdictions.”

Students and parents have expressed frustration and fear over the continued threats and Lewis said police are aware that these incidents are having an impact on the community and investigators continue to work closely with the School Board.

“We understand the frustration,” she said. “We are working on the investigation. There is depth and complication to the investigation based on the need of the police service to have to follow the laws that are required for how the anonymous information is coming through.”

“I think the average person appreciates that there are many obstacles and steps police services have to take in the age that we are in right now because there are protections for persons, protections for people wanting to be anonymous,” Lewis continued. “So the background for us to get through those hurdles to be able to get past something being anonymous requires lawful authorities and that is beyond just the police service. This affects other police servives. This affects anonymous programs.”

A tip-line dedicated to the investigation has been created at 684-5001 and Lewis said police have received a lot of cooperation from the public using the tip-line and she encourages that to continue. A reward of $5,000 for information that leads to the arrest and conviction of the person or persons responsible is also being offered by School Board, as well as a $1,000 reward by Crime Stoppers.

A public meeting is scheduled to take place on Thursday, April 11 from 6:30 p.m. to 8 p.m. in the Hammarskjold gymnasium with Board and school administration to answer questions from concerned parents and the community about the situation.

“The frustration is equal,” Lewis added. “I realize the public has provided us lots of advice, including parents saying please do this, please solve this. We are investigating this, we are working on this.”