Police are looking for the person or people who spray painted "disturbing" messages across the city, including one that read "kill Indians" on a sign near a high traffic area.
0
Jul 19, 2010 12:46 PM By: Scott Paradis 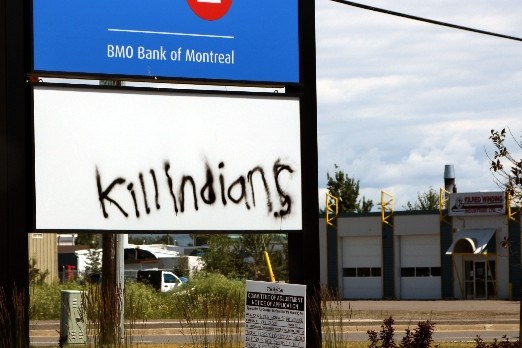 Graffiti crudely painted on a retail sign on the corner of Fort William Road and the Main Street is now under investigation by the Thunder Bay Police Service. The offensive message appeared sometime Saturday night or Sunday morning, but has since been removed. (Jeff Labine, tbnewswatch.com)

Police are looking for the person or people who spray painted "disturbing" messages across the city, including one that read "kill Indians" on a sign near a high traffic area.

The derogatory, anti-Aboriginal message was crudely painted on a retail sign for The Brick and Bank of Montreal at the corner of Fort William Road and Main Street. The message has been removed, but Thunder Bay Police Service officials say they believe the "offensive and disturbing" graffiti was placed on the sign sometime Saturday night or Sunday morning.

"It would be disturbing to anyone in looking at it," said city police spokesman Chris Adams. "It involved a very strong anti-Aboriginal statement … That graffiti has been cleaned up, but we are seeking the public’s assistance."

Three other incidents of offensive graffiti were reported in the Current River area over the weekend. Adams said the Current River vandalism featured anti-religious messages and also included the name tag of The Hesh.

"It might be an isolated incident, but anytime there is violence intended toward any group of people I think we should be concerned," Beardy said. "Its one group today, for example in this case it is First Nations people, but tomorrow it could be some other group that’s targeted."

"So whenever there’s racism involving potential violence, I think we should all be concerned as a society."

Beardy said he hasn’t personally experienced racism in Thunder Bay but acknowledges that it does exist, and snuffing out that racism starts inside the province’s schools.

"Right now when you look at any textbook in the school system, especially at the elementary level, the First Nations people are always portrayed as savages," Beardy said. "I think that’s wrong and I think as a society we need to work at that."

The Current River locations featured derogatory remarks about Jesus and what police are calling a satanic symbol. While the vandalism was all reported during the weekend, police can’t say at this point whether or not the Current River incidents are connected to the graffiti in the Intercity area.

"We don’t believe that these are gang-related messages," Adams said. "The tagging that has gone on in the Current River area is obviously someone who has feelings about religion. There was a satanic symbol left at at least one of those sites."

Police did not given the exact location of the Current River vandalism, but said two appeared at institutions while a third appeared on a residential property.

These incidents are now under investigation by the Community Policing Branch of the Thunder Bay Police Service.

Anyone with information regarding these incidents is asked to call police or Crime Stoppers.