Off to the races

World class mushers and sled dogs are taking to the trails just south of the border.
Jan 4, 2014 2:43 PM By: TbNewsWatch.com Staff 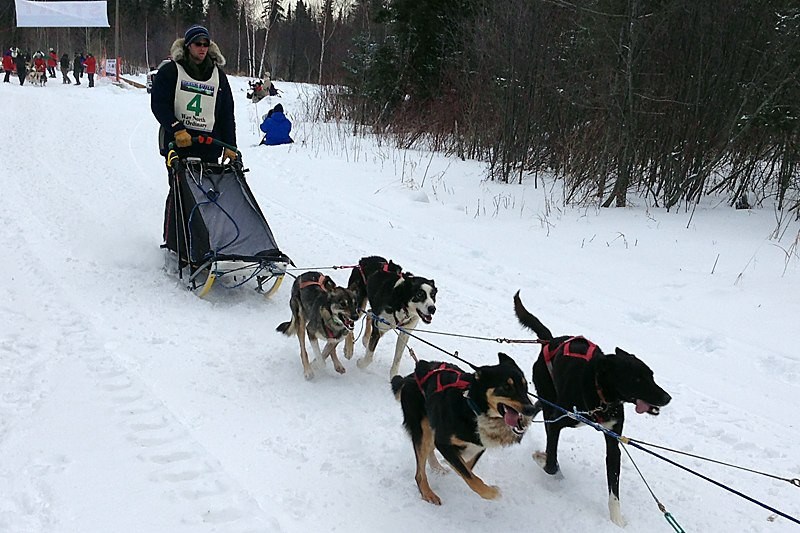 A musher and his team start their run at the second annual Gichigami Express Sled Dog Race at Grand Portage Lodge and Casino on Saturday. (Matt Vis, tbnewswatch.com)

World class mushers and sled dogs are taking to the trails just south of the border.

The second annual Gichigami Express Sled Dog Race kicked off just in front of the Grand Portage Lodge and Casino on Saturday, with more than 160 dogs kicking up snow.

The three-day event will have 14 teams traverse 290 kilometres of trail, with cumulative stage times added to determine the winner.

One of the pre-race favourites was the team representing Streeper Kennels, an outfit out of Fort Nelson, BC.

The father-son duo of Bud and Terry Streeper have combined to win 13 world championships in the past 20 years and made the lengthy trip to Minnesota to compete in the event for the first time, and first time racing in the state in the past 10 years.

They have a hired jockey out of Scotland running the sled, but they say the determining factor on the outcome will be the team of 12 canines leading the way

“Whether you’re first, second, third, fifth or seventh, it’s all about the dogs,” Buddy Streeper said. “The difference is how the dogs perform on each individual day. We’re trying to make the dogs happy and fit.”

The race kicked off in the morning under a shotgun start format, which each team starting individually with a three minute buffer between starts.

One of the more local entries was Nathan Schroeder, who is from Chisholm, Minn. Schroeder is a two-time winner of the John Beargrease Sled Dog Marathon in Duluth and is familiar with the terrain.

“It’s a huge advantage and I’ve been on this trail,” Schroeder said.

In addition to the Gichigami and Beargrease run later this year, Schroeder is gearing up for the marquee dog sledding event later this year: the Iditarod.

While this weekend’s event is a much smaller scale race compared to the 1,000 mile odyssey across the Alaskan wilderness that is the Iditarod, it will help towards getting ready for the big one.

“It’s a slow process to get there,” he said. “This might only be 180 miles but every mile counts that you can train for the Iditarod.”

The first stage of the event wraps up at the Hungry Jack Lodge, with the second stage ending on Sunday at the Landing on Devil Track.

The weather may have been cold to those on hand taking in the scene at the start, but it’s ideal racing conditions for the dogs.

“The spectators might think it’s a little cold but the dogs like it in the negatives. Anytime it’s - 10C or - 20C below they’re perfect, that’s optimal racing temperature,” Streeper said.

The event concludes on Monday at Grand Portage.