They’re not playing for the money, and their dreams of a career in the game have all but disappeared.
Mar 10, 2010 10:39 AM By: Leith Dunick 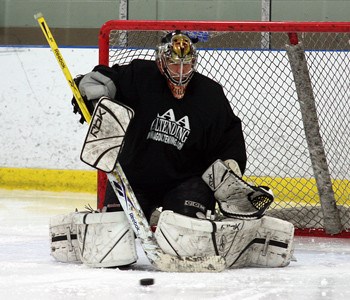 
They’re not playing for the money, and their dreams of a career in the game have all but disappeared.

Yet still a rag-tag collection of the city’s best amateur players marches on, a return trip to the Allan Cup the carrot on the hockey stick, so-to-speak.

The Thunder Bay Twins are back, and this weekend in Kenora will take to the ice against the Jeff Richards-led Kenora Senior Thistles and the relatively unknown, Borderland Thunder-laden Fort Frances Thunderhawks in a three-team round-robin affair.

The team that skates away on top in Sunday’s final earns the right to host the southern Ontario champion in the Renwick Cup, the national title qualifier, in Thunder Bay in early April.

Goaltender Colin Zulianello, the most experienced player on the Twins with an AHL and ECHL pedigree under his pads, said the players come out for the love of the game.

"It’s tough. A lot of us have major time commitments, but this is fun and this is why we do it," said Zulianello, a 31-year-old part-time goaltender coach for the Lakehead Thunderwolves and the Thunder Bay Kings, who is trying to fit school and supply teaching into his day.

The Twins roster is dotted with familiar faces. There’s Jeff Adduono, the former Thunderwolves forward. There’s Ian Staal – and what would a hockey team from Thunder Bay be without a Staal in the mix – and Chris Shaen, former CIS players. And there’s a host of Superior International Junior Hockey League graduates, a list that includes Brent Irwin, Kory McEwan, Joe Nigro and Jordan Smith.

Shaen, a defenceman who played for the University of Windsor, echoed Zulianello, saying a lot of players left home seeking their fortune and fame in the game, but when the time was right, they returned home, the competitive fires still burning.

"A lot of them still had the desire to play," said Shaen, readying for practice Tuesday night at their home base, the Fort William First Nation Arena. "There’s no better place than to play on a stage like this, the national championship (qualifiers) with the level of competition that’s out there."

It hasn’t been easy.

Last year’s squad, which made it to the Allan Cup for the first time since the Thunder Bay Bombers won the championship in 2005, was plagued with irregular practice times, and even fewer game opportunities.

Things have changed for the better in 2010, Zulianello said.

"We’ve got some scrimmages in with some junior A teams and we’ve been practicing a bit more lately. So it’s starting to pick up a bit as we’re coming into this weekend."

The Twins, coached by Dave Olenik, hope to use their experience, together with an injection of youth and speed, to confound their opponents in Kenora.

"At the end of the day, any short tournament that we’re playing in like this weekend comes down to goaltending and discipline. The hope is we stay out of the penalty box, we get the goaltending and then our depth, especially up front, will carry us into Sunday and hopefully a win," Olenik said, adding they hope to have a three-team senior league in place for next season.

The Twins take on Fort Frances at 8 p.m. local time on Friday night, and play the host Thistles, who they split with in a pair of pre-Christmas games, on Saturday at 7 p.m.