Usiski wins it for Stars in SO

The Thunder Bay North Stars had a plan once they managed to take the Wisconsin Wilderness into a shootout. It just took them an extra shooter to execute it.
Dec 16, 2010 12:29 AM By: Leith Dunick 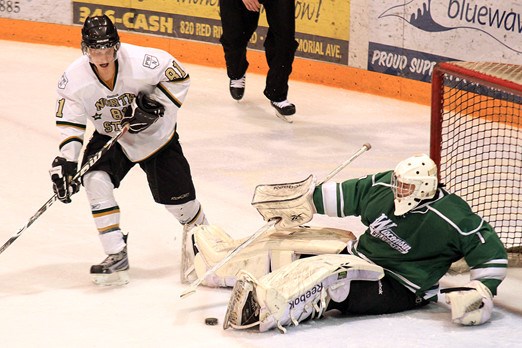 The Thunder Bay North Stars had a plan once they managed to take the Wisconsin Wilderness into a shootout.

It just took them an extra shooter to execute it.

“Everyone knew we should go low blocker, so I went in and said I’m going to shoot low blocker. It just squeaked through,” said North Stars forward Dan Usiski, who potted the winner in the 5-4 contest, beating Wisconsin goaltender John McLean with a shot that barely made it over the line.

He was the only successful shooter out of a combined eight to score in the shootout.

“I was so jacked, I was pretty excited there,” said Usiski, whose team needed a Mitch Marostica goal in the final minute of regulation to remain in the hunt for the two points and a share of top spot in the Superior International Junior Hockey League standings.

Picking a winner in this one was an oddsmaker’s nightmare, though the back-and-forth nature of the contest just goes to show how tight a race it is for first overall, with fans experiencing five lead changes before all was said and done.

North Stars coach Todd Howarth was just glad it was his troops who came out on top when the final whistle blew.

The game was a little closer than he would have liked, given the way the Stars played over the first 40 minutes, out-shooting their opponent 26-13.

“I thought in the first two periods we dominated, and we had a tie game. We came out in the third and we gave up a really bad goal that gave them the lead ... We were scared to lose. We gave up a brutal one to tie it up, then we gave up another bad goal right away and we fought back, we found a way.”

It was the Wilderness who drew first blood.

Up a man, Lucas Hendrickson drilled a shot from the point that careened off the end boards and onto the stick of Dawson Kuhlmann, who took a pair of whacks at it, the second one successfully beating North Stars goalie Guillaume Piche at 4:18 of the first.

Five minutes later Uskiski banged home a pass from behind the net from captain Mitch Forbes, tying the game at one, but Keith Tessin restored the one-goal Wisconsin lead with two minutes to go in the period.

Kyle Breukelman, with his first of two on the night, scored the lone goal of the second to put the Stars back on even ground, and scored the go-ahead goal in the third, minutes after Tessin was stopped by Piche on a rare penalty shot.

But after Kuhlmann knotted the game again, Tessin wouldn’t be denied, putting the Wilderness up 4-3 at 12:53 of the third.

It appeared to be headed for the books as Wilderness win, but with Piche on the bench for an extra attacker, Marostica crashed McLean’s net and punched the equalizer home.

Overtime solved nothing, though the Wilderness had a pair of chances to score. Derek Tylka slid one just wide that could have ended the game, and then, with 68 seconds to go teammate Dalton Betzen lit the lamp as he was falling to the ice, but the goal was waved off on a penalty call against Paul Zysko.

Star gazing: The Fort Frances/Wisconsin tilt originally scheduled for New Year’s Day has been pushed back to Jan. 23 ... It was the North Stars fourth straight win and snapped Wisconsin’s four-game winning streak ... Elsewhere the Dryden Ice Dogs blew a 3-0 lead to the Fort Frances Lakers, but eventually won it in overtime when Thomas Greene scored shorthanded in the final minute.