Last year Andre Watt signed up for the Sleeping Giant Loppet on the morning of the race, and then went out and finished ahead of the pack.
Mar 6, 2010 3:32 PM By: Leith Dunick 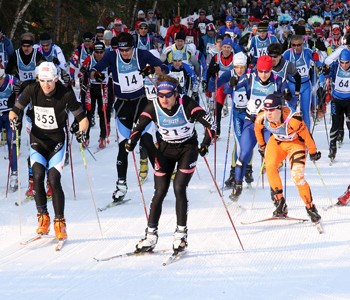 On Saturday, with the mercury well above the melting point within the depths of Sleeping Giant Provincial Park, he was up to his same old tricks again.

The Duluth native made the most of sandpaper slow conditions and crossed the finish line 28 seconds ahead of his onetime roommate Nikolai Anikin to win the prestigious 50-kilometre freestyle race for a second consecutive year.

“I definitely had to work harder this year. The course was prepared excellently, however the warm sun just baked it, so it was almost like sandpaper in a few spots where the sun had hit. We were about 10 minutes slower this year,” said Watt, who set a course record at the 33rd annual Sleeping Giant Loppet in 2009.

Watt said he raced in a group of four skiers, which included Thunder Bay’s top entrant, third-place finisher Jeffrey Cameron, for most of the race, and unlike last year, decided to maintain a pack mentality until much nearer the end of the course.

“With 8K to go I went on the hills and skied in hard,” he said. “I decided to go for it. Last year I went a lot earlier, about half way into it, but I knew with the warm conditions that that was too risky and might bonk,” said Watt.

Anikin, also from Duluth, said it was a tight race most of the way through, though the leaders found themselves traveling at an accelerated pace, thanks to another group of racers.

“For the first 12K, skiing with the 20K people, they were killing us, they were going really strong.  As soon as they turned off and it was just the five of us, we slowed it down. The real break came on the steep uphill, with about 8K to go. We spread out and I was successful in the sprint,” Anikan said.

For Cameron, it was another third place finish at the hands of a pair of Americans.

“There’s one big hill about 10K from here, and that’s where things really opened up. (Andre) went hard, Anikan stayed with him and had a little gap at the end. I caught back up to Anikan after a few K, and Watt kind of kept his 20 second lead more or less.

The former Lakehead University star finished two seconds behind Anikan, disappointing on one hand, but satisfactory on the other.

“It was the same as last year,” he said, managing a chuckle or two. “The whole time I was gunning for a top result, but I’ll take it, it’s better than fourth.”

The Thunder Bay contingent had a better result on the women’s side. Karla Bailey, who spent much of the winter attempting to qualify for the Olympics racing 1.5-kilometre sprints, topped last year’s winner Paulette Niemi of Ironwood, Mich. by four seconds, crossing the finish line in 2:34:28.

Bailey, 31, was just as surprised as anyone that she won, collecting the $1,000 first-place cheque in the process. It was her first 50-kilometre race in seven years, which makes her result that much more remarkable.

“That was a really good race,” an exhausted Bailey said. “All of us top three women skied pretty much the whole 50K. On the last 2K, Paulette said, ‘Come on girls, let’s pick it up. So we tried to go a bit harder and I knew the last kilometre I had to sprint, so I just went as hard as I could until the end.”

Race coordinator Peter Gallagher said the 2010 numbers were slightly down from what they expected, with about 750 entrants in a number of different race lengths and disciplines taking to the trails. That’s about 100 or so less than usual, which he attributed to a lack of snow in the region this winter.

“Everybody that skis regularly is out skiing, but it’s kind of the people on the fringe of the activity, who only in peak snow years come out to ski. We’re happy with those people that have come, but we’re always hoping for a little more.”