Lakehead raced out to a 29-5 lead on Saturday night at home and opened up a four-game cushion in the chase for the final OUA women's basketball playoff spot.
Jan 26, 2020 9:12 AM By: Leith Dunick 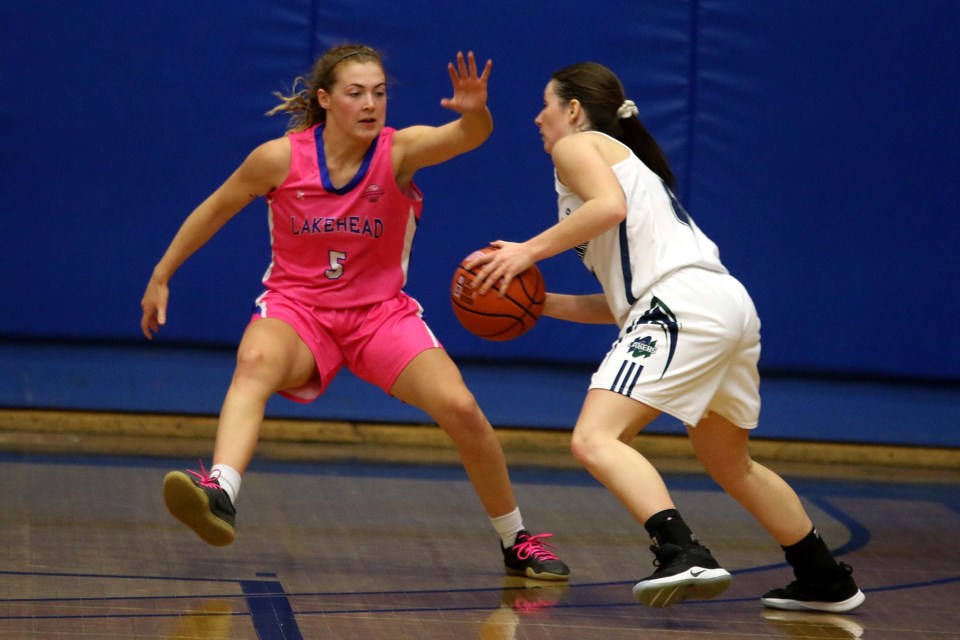 THUNDER BAY – The Lakehead Thunderewolves have planted themselves firmly in the post-season driver's seat.

5 lead over the Nipissing Lakers and cruise to an 86-49 win, their third in four outings.

For a second straight night it was second-year guard Sofia Lluch leading the way offensively, topping all scorers with 20 points, the third time in four games she's been in double digits.

The win improved the Wolves record to 5-11 on the season, giving them a four-point cushion in the hunt for the 12 and final OUA playoff spot, on the eve of a two-game set next weekend in Toronto against a Varsity Blues team chasing them down for that very berth.

Every game's a playoff game from here on in, said forward Lily Gruber-Schuz, who collected four points and 11 rebounds on Saturday night.

“We talked about it in practice this week, how important it was. We basically said this is our playoffs to get to playoffs, so it was super important for us to get the two dubs, and we did,” said Gruber-Schulz, who hails from Grand Marais, Minn.

Teammate Tiffany Reynolds, a force in the early going as the Thunderwolves established their insurmountable first-half lead, had 14 points and grabbed eight rebounds and dished out four assists. The third-year guard said the two wins this weekend give the team a world of confidence, but also showed their still learning from their mistakes.

“Yesterday we started out with a big lead, but we lacked energy in the second half,” Reynolds said. “So today we all focused on keeping our energy up, because when we play stronger teams they will capitalize on our turnovers and our lack of energy.”

It took the Lakers 18 minutes to hit double digits, but they finished the opening half with a flurry, potting nine more to close the gap to 43-19.

Any thoughts of a turnound went out the door in a hurry as the second half opened.

After Vanessa Willis opened the third with a bucket, Lluch took over, scoring seven points as part of a 9-2 run that pushed Lakehead's lead to 52-21.

The Lakers actually outscored them 16-15 to close out the third, but the game's fate was already in the books.

“It was an important weekend because we needed to get these wins to get our confidence,” Lluch said.

Lakehead coach Jon Kreiner said the plan was to get off to a great start, secure Nipissing's relentless three-point attack and defended with energy and consistency.

“I really thought we did that. Ten per cent from the field, 0-for-5 from three. We missed a lot of layups. I think Sofia could have had a triple double tonight if we had finished all our layups, but I'm very proud of how we started,” Kreiner said.

The win was soured in the fourth quarter when gritty third-year guard Tianna Warwick-Dawkins went down with a left knee injury.

The Whitby, Ont. native had to be helped off the floor and couldn't put any weight on her leg.

Kreiner said it's a costly loss.

“If she's out for any period of time it's going to hurt this team because we're already low on numbers and she's that person who can come in and play almost any position but the five-spot,” Kreiner said. “She'll get the loose balls, play good, solid defence and she gives us consitency.”

Celeste Dupuis was the lone Nipissing player to finish in double-digits, collecting 13 points for the 3-13 Lakers.

Four teams – Toronto, Nipissing, Algoma and Waterloo – have six points and six games to play in the chase for the last OUA women's basketball playoff spot.

Thunder Bay's Kelsey Tikka to be inducted into Golden Hawk hall of fame
Sep 20, 2020 2:26 PM
Comments
We welcome your feedback and encourage you to share your thoughts. We ask that you be respectful of others and their points of view, refrain from personal attacks and stay on topic. To learn about our commenting policies and how we moderate, please read our Community Guidelines.