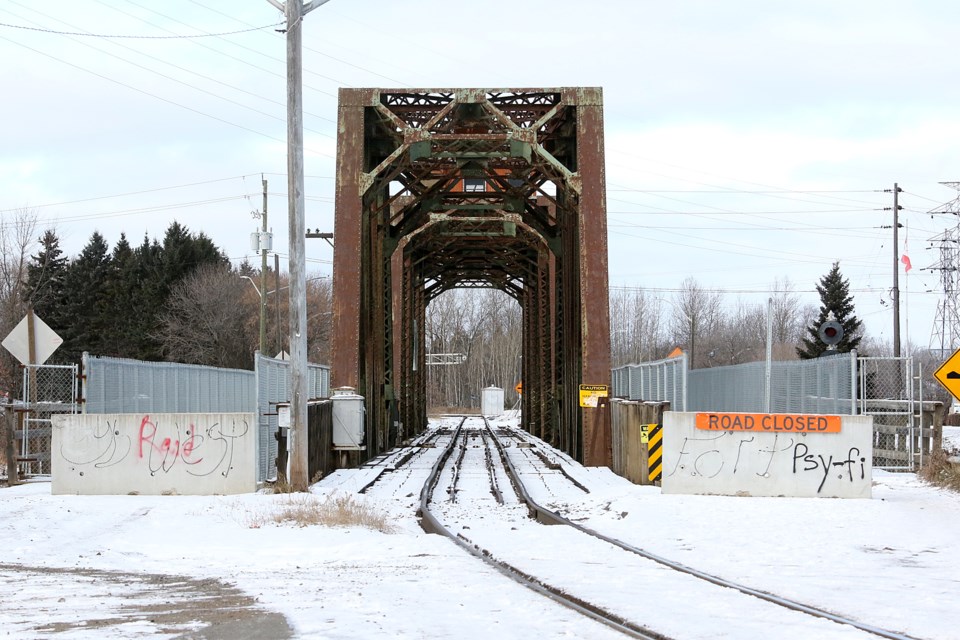 The James Street Swing Bridge has been closed since October 2013. (Leith Dunick, tbnewswatch.com)

The country's highest court on Thursday rejected CN's leave to appeal application, which sought to have the court hear its case to overturn last year's Ontario Court of Appeal ruling that ordered it to reopen the span to vehicular traffic. The court dismissed the application with costs.

The CN-owned century-old –bridge, connecting Thunder Bay to Fort William First Nation across the Kaministiquia River, has been closed to vehicular traffic since a fire broke out on the northern approach spans on the evening of Oct. 29, 2013. While trains resumed crossing later that week, the ongoing closure has resulted in Highway 61 providing the only road access to Fort William First Nation.

The Ontario Court of Appeal last year overturned a previous decision by the Ontario Superior Court of Justice, ordering the railway to reopen the span. The three-judge panel found the ongoing closure of the bridge breached the original 1906 agreement between the former Town of Fort William and Grand Trunk Pacific, a pact that was inherited by the City of Thunder Bay and CN. That agreement compelled the railway to provide citizens the perpetual right to cross the span.

Thunder Bay mayor Bill Mauro said while city and Fort William First Nation officials are very happy with the decision, he wanted to remain cautious about their messaging.

“Right now we have a decision from the Supreme Court that has very clearly said – in our minds and I think in everybody’s minds – (CN) has exhausted the legal processes but we don’t know if they have,” Mauro said.

The railway initially won won the first battle of the legal saga in June 2017, when Superior Court Justice Patrick Smith ruled that CN wasn't responsible for reopening the bridge and that the 1906 agreement did not clearly require the railway to make the repairs and upgrades to bring the structure to modern standards.

That decision was overruled one year later

Following that June 2018 appeal court decision, CN returned to court four months later seeking a two-month stay while the case was in the hands of the Supreme Court. The railway estimated costs of between $4 million and $6 million for the bridge's reconstruction. The appeal court denied the request for the stay.

Mauro said questions about the timeline for the bridge to reopen should be addressed to CN.

“The Ontario Court (of Appeal) decision from June 2018 was very clear on what the expectations are,” Mauro said.

Fort William First Nation chief Peter Collins said preliminary discussions with CN have indicated the railway could have the bridge reopened by Aug. 31.

"We get to have something that we utilized for some 100 years and then all of the sudden denied that access. It will be great for our side of the bridge in Fort William and also the Westfort area, which I know they've been waiting for quite some time," Collins said.

"It'll mean easier access, safer access for our elders, for our kids that go into the city for school. It will help grow our economy again and bring back some strength and opportunities. We have a lot of land that's identified as industrial land. Hopefully we can develop that with the bridge access again."

A CN statement said the company has sought proposals to reopen the bridge and the successful bidder will be confirmed in the coming days, with work expected to begin in the spring.

"While CN continues to consider options to get further clarity on its long-term obligations, none of these options will impact CN’s decision to proceed with that work," the statement reads.

The various legal avenues pursued by the city have cost more than $1 million, which Dougall Media learned last year through a Freedom of Information request and was confirmed by city manager Norm Gale on Thursday.

“City council from the start has been resolute and determined in their course of action in this issue with CN and the bridge,” Gale said. “Council has been unwavering in pursuit of the resolution that we reached (Thursday).”