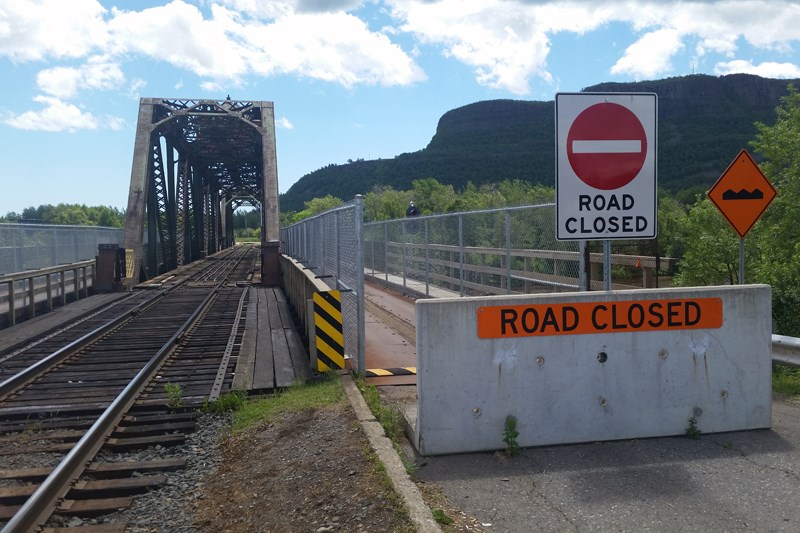 THUNDER BAY – The legal battle to force CN Rail to reopen the James Street Swing Bridge has already cost the city seven figures, despite to this point being unsuccessful in its efforts to secure a ruling that would allow vehicles to again cross the span.

The century-old bridge, owned by the railway, has been closed to vehicular traffic since a fire broke out on the northern approach spans on the evening of Oct. 29, 2013. While trains resumed crossing later that week, vehicles have been unable to use that connection between Thunder Bay and Fort William First Nation ever since.

After first striking out at the Ontario Superior Court of Justice, the city turned to the Ontario Court of Appeal and is still awaiting a decision.

That multi-year process has resulted in the city incurring more than $1.3 million in external costs pursuing the case through the courts, Dougall Media has learned through a freedom of information request. Those expenses were generated over a number of years and include payments to legal personnel and fees to experts who inspected the bridge on behalf of the city and provided advice.

“The cost is the cost,” city manager Norm Gale said on Thursday.

“That we have spent $1.345 million is clear demonstration of the confidence we have in the case and of council’s commitment and council’s resolve to hold CN to task to meet their commitment to reopen their bridge. Council’s intent is to have that bridge reopened by CN.”

Gale said the decision to use an outside legal team – rather than resources from the city solicitor’s office – was made for “specific legal expertise.”

“This file has a long history. There’s a lot of information that needed to be reviewed that dated back 100 years ago. That takes time and effort and energy,” Gale said.

The city’s initial bid to legally compel the railway to reopen the span was rejected by Superior Court Justice Patrick Smith last June, who ruled the original 1906 agreement did not obligate CN to make the repairs and upgrades that would be required to bring the bridge up to code.

A CN-commissioned engineering assessment found fire damage to the structure was relatively minor but there were several safety deficiencies on the roadway and pedestrian portions, such as the “narrow roadway lane and sidewalk widths, absence of traffic barriers, inadequate pedestrian and cyclist handrail.” It also determined it was possible for vehicles to climb over the curb and off the bridge into the river. The width of the roadway was measured at 2.85 metres, less than the standard of three metres.

In his decision, Smith had ruled the city’s case did not meet legal requirement to define what the railway would have to do to make the bridge safe.

“Without a specific and detailed proposal from the city – one that has been tested and approved as structurally safe for public traffic, this court is left without reliable evidence upon which to formulate the orders that the city is seeking,” Smith wrote.

The city then turned to the appellate court one month later, filing a challenge with the Ontario Court of Appeal in July. The appeal argued Smith had “failed to understand what he was being asked to do, and failed to understand that his role was to interpret the 1906 agreement” when he made his ruling.

“In particular, this appeal will decide whether CN can deprive the city of its perpetual contractual right to have the bridge open for the use of its residents and the respondent Fort William First Nation, while CN continues to enjoy the perpetual contractual rights granted to Grand Trunk in 1905, including the right to run trains over the city’s streets, which CN continues to do to this day,” the notice of appeal reads.

The case was heard by court in Toronto in late January. A decision, which has yet to be delivered, was said to be expected within the following two to six months. Gale on Thursday said a decision could come “any day.”

“What do you think you’re going to win?” Collins asked city councillors at a special joint council meeting between the two communities in February. “A 112-year-old bridge that has outlived its lifecycle. You talk to anybody with bridge experience they tell you the life cycle of a bridge is 100 years.”