Outside entities will be invited to submit proposals to build indoor turf facility, with no parameters on cost, design, or location.
May 18, 2021 12:09 AM By: Ian Kaufman 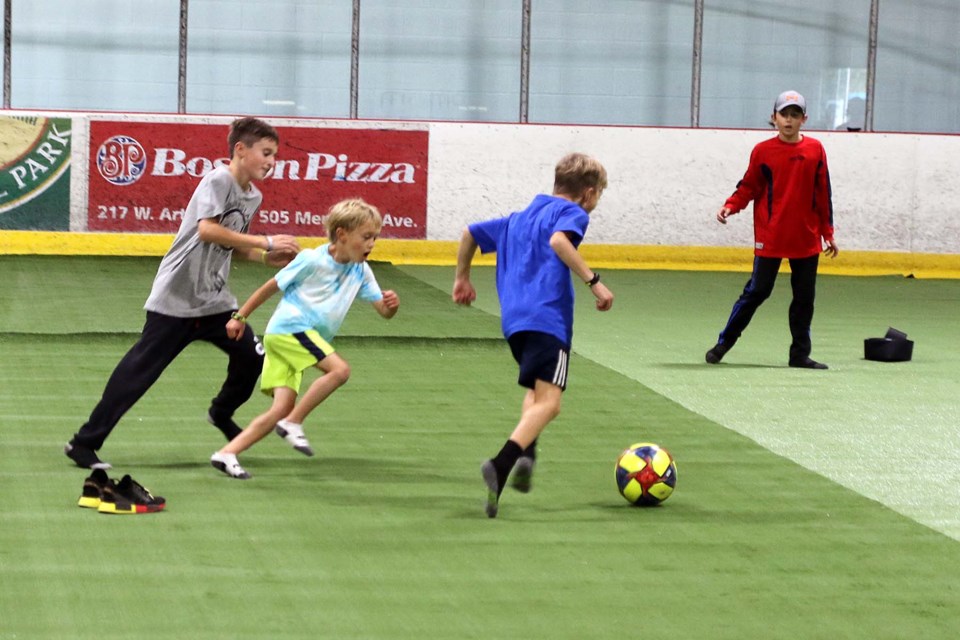 Local soccer groups have been without a permanent indoor venue since 2016, instead turning to solutions like a converted rink at the Tournament Centre. (Leith Dunick, TBNewswatch/FILE)

THUNDER BAY – Thunder Bay’s city council has thrown the door open to new possibilities for an indoor turf facility, welcoming proposals from the private sector with no clear limits on what a new scope for the project could look like.

Council voted unanimously Monday to launch an expression of interest (EOI) process, though several councillors were less than enthused about its prospects for success.

Entities that submit EOI proposals will be able to present their own designs, suggest locations other than Chapples Park, and offer shorter-term solutions like a bubble, said Coun. Mark Bentz, who put forward the motion. Public-private partnerships to operate or pay for the facility will also be on the table.

The move comes after council voted narrowly in March not to award a $39 million tender to build a design it approved in principle last year.

At the time, councillors who voted down the tender said the facility’s rising price tag and the uncertain financial impacts of COVID-19 left them unable to support it.

The local soccer community has expressed frustration over the city's indecision on how to respond since a privately-owned sports dome at the CLE collapsed in 2016, leaving thousands of players without a permanent indoor venue.

The city needs to consider all available options to build capacity for indoor sports at a more acceptable cost, Bentz said Monday.

Council is still set to receive a report from city administration in the fall, presenting a range of options to move forward with a turf facility. Bentz said his motion would simply add more potential solutions to that menu.

The at-large councillor said he was aware of at least four private sector proponents that had approached municipal leaders with unsolicited interest since council rejected the tender.

"It doesn't mean they're going to come across the finish line with a winning product," he said. "It is, though, an indication that there's interest."

Mayor Bill Mauro, who has championed the project, was sceptical the EOI process would unearth anything more appealing than the design council had settled on last year.

Options like a bubble and partnerships with the private sector had already been considered by council and discarded, he said.

"We always knew we could have built something cheaper," he said. "We have those reports – we said no to that."

A solid structure had been estimated to save money over a longer lifetime, he said, largely thanks to lower energy costs.

"The only way we're going to do it cheaper is a bubble – period, full stop," he said. "Nobody's miraculously going to come out of the woodwork and do a pre-engineered metal building for us now that's substantially cheaper, unless maybe [it's in] a different location, but then that's a four- or five-year exercise again – or you substantially reduce the size of the field."

Coun. Shelby Ch'ng echoed the mayor's sentiments, saying she couldn't see what would have changed since council considered a wide range of options in 2019.

“I’m not holding out hope, but I’ll support this motion because I think it’s all we have at this point," she said.

Some councillors worried the EOI process was too open-ended – Coun. Albert Aiello said a full-size field that can be divided into four and a walking track should be non-negotiable, for example.

Coun. Aldo Ruberto wondered whether it would be advisable to set a cost ceiling, suggesting the project had lost majority support at council when it passed the $33 million threshold.

Questioned by councillors, administration said the open-ended process envisioned by Bentz's motion would be a departure from normal procedure, but city manager Norm Gale said there was nothing wrong with that.

Bentz's motion ultimately passed with no amendments, with administration directed to return with a report on the EOI process by June 14.

The process would not be launched before then, Gale said.

The motion was passed unanimously by council, though Mauro appeared to leave the meeting briefly and his vote was not recorded.