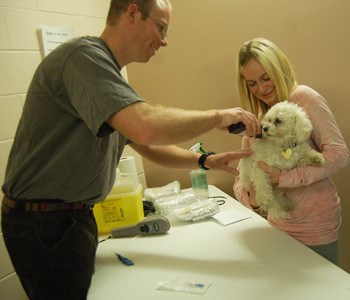 Dr. Alec Smith scans a dog with a chip while Amanda Delben holds on to comfort the animal at the Thunder Bay and District Humane Society on Saturday. (Jeff Labine, tbnewswatch.com)
Owners worried about pets safety implanted a small microchip to ensure their dogs or cats return home.

The Thunder Bay and District Humane Society on Rossylne Road held its annual Chip-a-thon on Saturday. More than 30 people came to the humane society to have a small pinpoint-sized microchip implanted into the backs of dogs and cats.

The chip contains personal information about the pet’s owner. A veterinarian injected the chip into the back shoulder blades of the animal. Only a specific scanner can read the 10-digit ID code by passing over the animals’ back. The human society offered a reduced price for the chip normally, $50 to $60, but sold it for $35 with proceeds going to the humane society.

Amanda Gregory brought in three of her dogs to inject the chip. The small dogs didn’t move too much while a veterinarian injected a small needle. The dogs gave a small yelp but remained calm. Gregory said she understands the importance of getting an ID code to identify her dogs.

"If I ever lose them I’ll get them back," Gregory said. "I’m getting them done here because it’s cheap."

Alec Smith, a veterinarian with Northwester Veterinarian Hospital, said the number of people bringing in their pets to receive the chip increased since he first started his career in 2001.

Smith said wildlife studies commonly use chips to monitor and track animals. He said it is a simple procedure and causes little discomfort to the animal.

"Basically we use a very sharp needle, much like we would for an injection like a vaccination, and the microchip is about the size of a grain of rice," he said. "With a good hold and a scratch from mom, the pets are pretty good."

This quicker method of tracking down the owner of the animal means less time spent at the humane society, she said.

"it is perfectly safe," Saretsky said. "My cats were microchipped twice by mistake. I adopted two cats from the shelter here, took them to my vet and forgot they already got microchips. So they have two chips in them."

Saretsky said after the injection, veterinarians asked the dogs and cats not move too much to make sure the chip doesn’t shift.